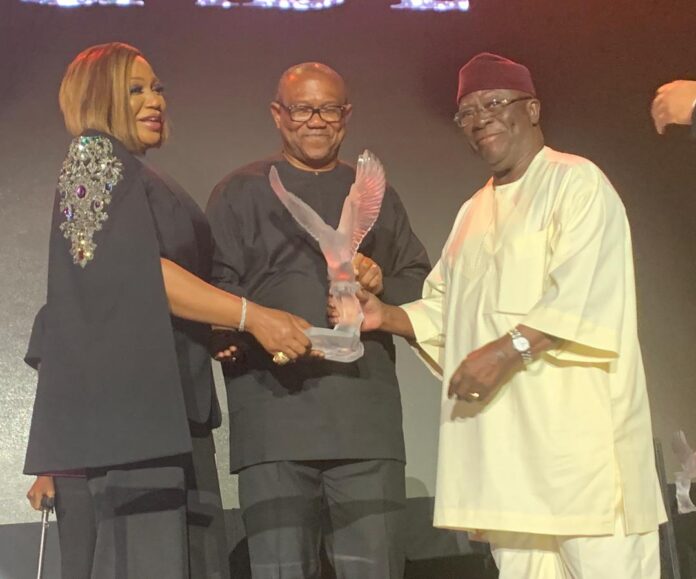 The people of Agulu, Anambra State have expressed happiness over the emergence of their son, Peter Obi, as “The Governor of the Decade” in Nigeria.
Obi, the immediate past Governor of Anambra State and Vice Presidential Candidate of the Peoples Democratic Party during the 2019 presidential election, was conferred with the award by THISDAY during the newspaper’s Silver Jubilee celebration on January 20 in Lagos.
Agulu people hailed Obi’s feat in a statement on Wednesday signed by the Traditional Ruler of the town, His Royal Highness, Igwe Innocent Obodoakor, and the Traditional Prime Minister, Ichie Anagboso, entitled: “Our Son in whom we are well pleased.”
They said that the award by THISDAY did not come to the people of Agulu as a surprise, in view of what they called “Obi’s exemplary conduct both in and out of office.”
The release says in part: “We have read the reasons Thisday gave that prompted the recognition. We agree with them entirely. We wish to let the world know that beyond the national credentials that made him fit for the award, he is also a very good and an exemplary Agulu man.
“Where do we start from to eulogise him? No word is adequate to convey his goodness, which shines forth and inflicts all that come in contact with him. He is perhaps one highly-placed gentleman that is not at loggerheads with his town for any reason. The people of the town love him for his accessibility and humility. Above all, his yearly empowerment in Agulu, which he does without making noise, shall continue to be cherished by the people of Agulu.”
In giving Obi the “Governor of the Decade” award, THISDAY said he was chosen for the honour because, beyond other former governors, he introduced civility to government and also left over N75 billion in the treasury of the state which has been investigated and proved as correct.
THISDAY also noted what it called Obi’s “singular earth-quaking re-building of the education sector” after he returned schools to the Church and his altering of the political calendar of Nigeria through epochal court judgements.
Elder statesman, Chief Ayo Adebanjo, who presented the award, said to Obi: “We have watched you over the years, you will go higher my son.”