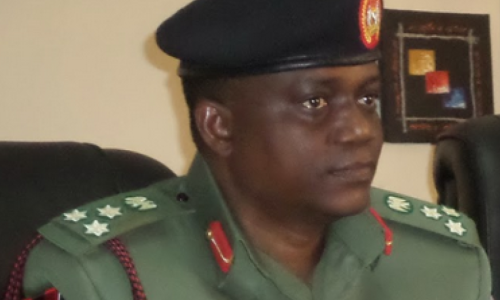 The National Youth Service Corps will review the Memorandum of Understanding it signed with the Independent National Electoral Commission to ensure better protection of corps members during elections.
The NYSC Director-General, Brigadier General Johnson Olawumi, made the statement on Tuesday in Abuja when the INEC Chairman, Prof. Mahmood Yakubu, paid a condolence visit to him.
Yakubu visited Olawumi to commiserate with the scheme on the death of Okonta Samuel, a corps member who was killed by gunmen during the Rivers State re-run elections on Saturday.
Olawumi said the NYSC had set up a panel of inquiry to investigate the killing.
He added that the findings of the panel would determine the need for the review of the MoU between both organisations.
Olawumi pledged that the NYSC would do all it could to ensure that those who killed Samuel were caught and made to face the law.
He criticised the failure of the government and community leaders in the state to protect the deceased, who was killed in the same community where he was posted to serve.
He said: “In past elections, corps members have gone and come back peacefully.
“It is a shame that a society where there is government, elders and community leaders will allow an innocent corps member be killed.
“Since 2011, the scheme has been doing all that needs to be done in collaboration with INEC to ensure the safety and security of corps members.
“This incidence is very unfortunate.
“Over the past couple of years, we have taken part in elections in Edo, Anambra, Kogi, Ekiti, Osun States.
“As turbulent as these elections were in these states, over 6,000 corps members took part and no one was lost.
“About 134,000 corps members took part in the 2015 elections, 5,000 took part in the Bayelsa election, while over 6,888 took part in the Rivers re-run elections.”
While commending security agencies for their role in ensuring the protection of corps members, the DG said the NYSC would review security arrangements to forestall future occurrence.
In his remark, the Minister of Youth and Sports, Solomon Dalung, said the death of youths during elections was becoming a “recurring decimal”.
Dalung said acts of violence during elections in the country was not only condemnable, but also a reflection of “primitive political culture”.
Dalung said at no point should officials and spectators of a game be made to be casualties of that game.
He said as leaders, politicians must conduct themselves properly and hold life as sacred.
He said: “Nigerian politicians must respect the rules of the game.
“We assure Nigerians that under this administration of change, impunity will not be celebrated.
“This government will definitely spare no room for impunity again because it is impunity that has spoilt this country from the beginning.”
Earlier, the INEC chairman pledged that the commission would participate in honouring the deceased and other corps members who might suffer from any form of injury in the cause of participating in election duty.
Yakubu said: “I wish to inform you that we share in your grief; we feel your pain when life is lost when conducting elections.
“No matter the grievance of those involved in political contest, nothing justifies the cold blooded murder of an innocent official conducting a legitimate national assignment intended to afford citizens the right to freely choose leaders.”
Yakubu said the commission was glad to note that another corps member, Anana Udoetor, who was declared missing during the elections, was found alive, hale and hearty but understandably traumatised.
According to him, the NYSC and INEC have been in this “happy partnership”, which has tremendously helped in the conduct of our elections.
He said: “I cannot imagine the successful conduct of elections in Nigeria without the partnership of the NYSC.
“The young men and women in the NYSC are among the most educated, committed, reliable, neutral and patriotic election duty staff available to INEC.
“Their loss in the cause of national assignment is a tragedy and monumental national loss.”
Yakubu promised that the commission would offer employment to an ex-corps member who lost his eyesight as a result of injuries sustained in the cause of conducting the 2011 general elections.
Yakubu said the ex-corps member would also be deployed to any INEC state or local government office of his choice.
NAN.