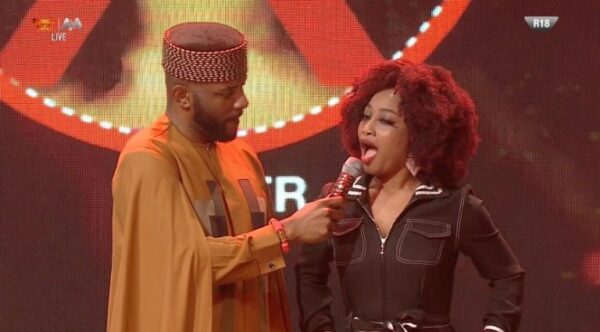 Housemates, Esther Agunbiade and Daniel Tioluwa, aka Sir Dee, have been evicted from the ongoing BBNaija Season 4.
The News Agency of Nigeria reports that they were evicted on Sunday during the live show and swiftly follow Gedoni Ekpata and Jackye Madu who were evicted on August 25.
Esther, who was romantically linked with Frodd, was the first female Head of House in the show and the first woman to hold the position twice.
She was also in a love triangle with Frodd and Nelson.
On stage with host, Ebuka Obi-Uchendu, she said: “Frodd is sweet and Nelson is my gee.”
The 28-year-old banker and visual artist had initially said he would use the prize money to take his parents on a trip to see his sister.
NAN reports that earlier, musician Jidenna visited the housemates, whom Biggie had asked to freeze the moment he entered.
The “Classic Man” singer spent time with the housemates and Obi-Uchendu minutes before the live eviction show.
Also, ex-housemates Gedoni and Jackye, distributed their Bet9ja coins among the housemates as is the tradition after eviction.
Jackye shares her @Bet9jaOfficial Coins: 200 goes to Mike, 50 to Venita, 20 each to Seyi, Khafi, Diane, Esther, Mercy and 10 Coins each to Cindy, Ike, Omashola and Sir Dee.
On his part, Gedoni gave all his coins to love interest, Khafi Kareem.
Meanwhile, Khafi, who is current Head of House and two time Saturday game winner, said she is focusing on the show.
“I can’t take any day for granted. I have to step my game up,” Khafi responding to her new disposition in the BBNaija House.
NAN.