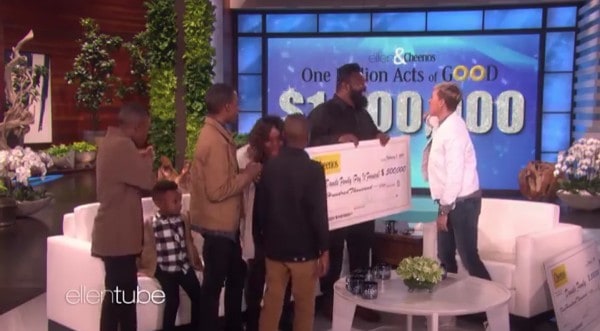 The family was giving the money during the Ellen DeGeneres as part of the contest: “One Million Acts of GOOD,” sponsored by the people of Cheerios to support people doing good.

The family was nominated for assisting a family with a new baby pay their bills at Wallmart, despite having little cash with them.

She said the money is to enable them pay off their debts, pay for their four children’s college, buy a new home, as well as spend on other needs.

Earlier, the family of six was video-taped in their house by the ellenshow crew before they were taken to the live show.

Mr. Daniel expressed joy and appreciation to DeGeneres, who they always watch the show.

“You are a true humanitarian, and I love and I will always love you for your job and you are always giving,” he said.

DeGeneres is also a comedian, actress, writer and producer, and has starred in the popular sitcom Ellen from 1994 to 1998 and has hosted her Syndicated TV talk show, The Ellen DeGeneres Show, since 2003.

She has hosted several awards, including: Academy, Grammy and the Primetime Emmys, and has written four books and started her own record company, Eleveneleven, as well as a production company, A Very Good Production.

She has won 30 Emmys, 20 People’s Choice Awards and numerous other awards for her work and charitable efforts, including the Presidential Medla of Freedom in 2016.

Forbes estimated DeGeneres’ 2018 earnings at $87.5 million, making her the 15th highest paid entertainer in the world.

In 2015, she was named the 50th most powerful woman in the world by Forbes and number two on the World Pride Power list.