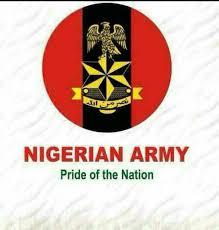 Brig.-Gen. Jude Chukwu on Monday assumed duty as the new Director of Army Public Relations.
Chukwu takes over from Brig.-Gen. Sani Usman, who proceeds for a course at the National Institute for Policy and Strategic Studies, Kuru, near Jos.
Until his appointment, Chukwu was the Commandant of the Nigeria Army School of Public Relations and Information, Lagos.
Speaking shortly before he handed over to the new spokesman, Usman described his tenure as Army spokesman as a mixture of “excitement, challenges and adventures’’.
He, however, said the challenges and excitement enabled him to effectively discharge his duties, adding that the “experience and knowledge acquired will continue to be cherished’’.
He thanked the Chief of Army Staff, Lt.-Gen. Tukur Buratai for the opportunity given him to serve, as well as Defence Correspondents for their understanding and cooperation.
Usman urged them to extend same cooperation to the incoming army spokesman.
In his remarks, Chukwu also thanked the army chief for the appointment and confidence reposed in him and pledged to live up to expectation.
While soliciting the cooperation of the media, he urged them to put national interest above any other consideration in reporting security issues.