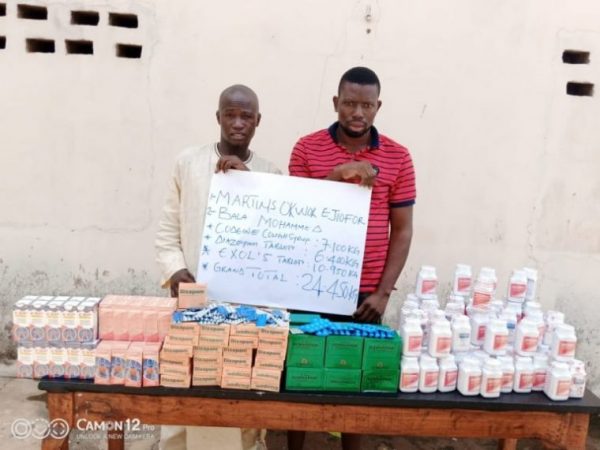 The Agency’s Director Media and Advocacy, Femi Babafemi, announced this in a statement on Wednesday in Abuja.

Babafemi said the drugs intercepted were meant to be delivered in Gwada, Shiroro Local Government Area of Niger State.

The Director said the state’s NDLEA Command’s Highway Patrol Team along Okolowo (Ilorin)-Jebba highway intercepted the consignment in a bus on June 5.

He said Ejiofor had travelled to Lagos with the second suspect to procure the drugs and deliver to dealers in Gwada.

Babafemi said: “During interrogation, he confessed that he had been arrested with more than 50 kilogrammes of cannabis sativa and charged to court by the Niger command of the agency in 2020.

“He completed his one-year jail term in March and resumed his nefarious illicit drug business.”

In another development, the operatives of the Delta State Command of the agency also arrested 20-year old Chukwujeku Lucky at Ogwashi Uku, Delta State with multiple drugs weighing 38.90kg on June 4.

Babafemi quoted the Chairman, NDLEA, retired Brigadier General Buba Marwa, as commending the commanders, officers and men of both Kwara and Delta States Commands for the arrests and seizures.

Marwa said the development would, in no small measure, reduce the availability of illicit substances available to bandits and other criminal elements who take them as enhancers.