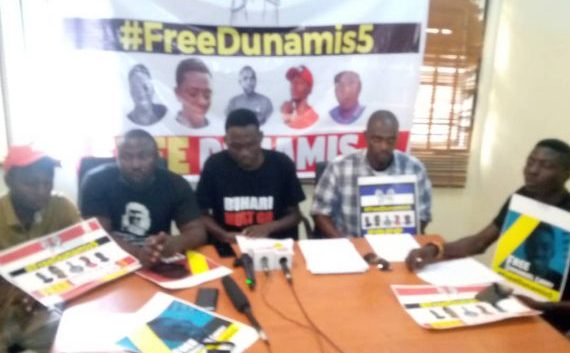 A group under the auspices of Take It Back Movement Nigeria has threatened to stage a peaceful protest at the Dunamis International Gospel Centre Headquarters along Airport Road, Abuja on Sunday if the Department of State Services refused to release five activists still on detention.

The organiser of the group, Damilare Adenola, disclosed this at a press briefing on Friday in Abuja.

It would be recalled that five persons spotting T-shirts inscribed with: “#BuhariMustGo,” were on July 4 allegedly arrested by the church security and handed over to DSS operatives.

The activists, who were detained by the country’s secret police, are yet to be released for about five days now.

The group, which insisted that protest remains a democratically permitted action anywhere, anytime and any day In Nigeria, called for their immediate and unconditional release of the detainees.

Adebola said: “For the sake of justice and posterity, it has become pertinent to clear the air on the realities surrounding the arrest and detention of 5 congregants putting on shirts inscribed with #BuhariMustGo at the Dunamis International Gospel Centre on Sunday July 4th 2021.

“On the above-said date, ten youths attended Sunday church service at the Dunamis International worship centre known as the ‘Dome’ in Lugbe area of Abuja , with T-shirts inscribed with ‘Buhari Must Go’ and as a culture of the church, when it was time for first-time congregants to step out, a ritual known as ‘Altar Call,’ they did peacefully step out to receive prayers and the church ushers also offered them welcome gifts and holy communion.

“In the course of this, one of them, Emmanuel Larry, a freelance journalist, captured the moment on Facebook Live video.

“It appears that the symbolic protest carried out by the youths met the wrong side of the church management, who quickly alerted their security officers to accost them on the way out of the church premises.

“As soon as a batch of these young people departed and the other was awaiting a cab to ferry them, a set of furious church security guards approaching them unleashed violence to arrest and falsely imprisoned them within the church facility and thereafter invited the State Security Service aka ‘Department of State Services’ to take custody of them for reasons only known to the church.

“During the course of this unfortunate event, Emmanuel Larry, the journalist among them, was coerced to delete the live Facebook video he had earlier made.

“These allegations would definitely be supported with video interviews which would be availed to pressmen wherein eye witness church members attest to these laid down facts.

“For the records, it is important to state that since the unfortunate event which happened five days ago, the detained young people have been denied access to their lawyer and close family members even though they have not committed any offence known to the laws of Nigeria.

“The arrest and continued detention of these courageous young people have no basis in law and are a contravention of their fundamental human rights to freedom of expression, assembly and freedom of movement as guaranteed under sections 39, 40, 41 respectively in the Nigerian Constitution and other international conventions and treaties to which Nigeria is a party to.”

The group, however, disagreed that the young persons went to the church with such inscription on the T-shirts in an attempt to instigate a religious crisis in the country.

It said: “Moreover, as we speak, a group of lawyers have filed for the enforcement of the fundamental human rights of the detained persons in a joint suit involving the DSS, who is holding them illegally in custody, DSS Director General and Pastor Paul Enenche, the Senior Pastor of Dunamis International Gospel Centre, who handed them over for arrest, have been joined in the lawsuit.

The group also condemned the arrest of “Nnamdi Kanu, who was tortured and unlawfully repatriated from Kenya; Sheikh El-zakyzaky whose arbitrary detention has spanned over 2000 days; Oduduwa Republic agitators whose house was invaded and resulting to the extra-judicial killing of 2 and continued illegal detention of 13 person and #EndSars activists wallowing in illegal detention.”

The movement, who called for the immediately release of all these arrested persons, vowed to embark on a national wide protest to compel the government “to heed the voice of justice.”

The Convener of the #RevolutionNow Protests and Publisher of Saharareporters, Omoyele Sowore, also joined the group to condemn the development.