Gov. Abiodun pledges to forge ahead on infrastructure delivery 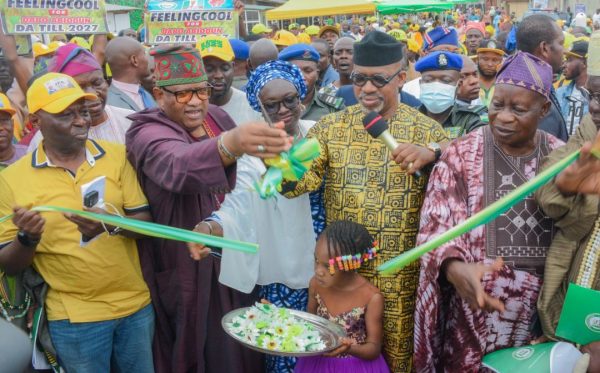 Ogun State governor, Prince Dapo Abiodun, has declared that his administration would continue to provide infrastructure, capable of opening up and driving the economic development of the state, despite paucity of funds.

Abiodun gave the declaration, Monday, while speaking at the inauguration of the 2Km Igan-Ishamurin-Odo Shikiti Road, in Ago-Iwoye town, Ijebu North Local Government Area of the state.

“For us in Ogun, our goal is to put our state in the league of advanced economies and make it an investors’ destination of choice. To achieve this, we know the importance of modern day and world-class infrastructure. For this reason, we will continue to rehabilitate existing infrastructure, build new ones and also put them in a position where they will not only stand the test of the time, but serve as a catalyst for our socio-economic development.

“As an administration, we have identified our focus and have taken as a key priority, the development of infrastructure that will ensure the much-desired socio-economic development of the state.

“It is the desire to achieve this objective that makes us to commit huge resources to the development of infrastructure while not neglecting other sectors competing for the scarce funds of the State Government”, the governor stated.

He noted that the Igan-Ishamurin Odo Shikiti road was designed to improve the socio-economic life of the people of Ago-Iwoye, as well as the surrounding communities, by making transportation smooth and convenient for farmers when evacuating their farm produce to urban market centres.

Abiodun observed that the road would also serve as a link to Ago-Iwoye, Oru Ijebu and Ijebu-Igbo townships.

He added that the road handled by an indigenous contractors was completed and provided with streetlights, good drains, culverts and has four lay-byes on the stretch of the road to cater for the pedestrians safety.

While maintaining that the road commissioning would serve as a form of reassurance to other parts of the state, of his administration’s desire to keep and fulfill all electoral promises, the governor said work was at an advance stage at the Illisan-Ago-Iwoye road, abandoned more than 11 years ago.

Abiodun, however, called on the residents and motorists to take ownership of the road and desist from blocking the drainage or making a bonfire on it.

“Please, protect this road because it is yours. By doing this, you are helping us in building our future together’, he added.

Governor Abiodun, who stressed that his administration would not allow the people to suffer unnecessary hardship, disclosed that the failed portions at the Sango-Ota-Ijoko road were being laid with asphalt.

He disclosed further that he had awarded a contract for the repair of failed portions along the Abeokuta- Ifo- Lagos expressway, reiterating that his administration would continue to construct or rehabilitate any economic viable road in the state, whether it belongs to the Federal Government of Ogun.

Earlier in his welcome address, the Commissioner for Works and Infrastructure, Ade Akinsanya, said the road which was started and completed by the present administration, would improve the economic activities of people living along the road, calling on the to good use of the pad and desist from dumping refuse on the drainage.

A former deputy governor, Senator Sefiu Adegbenga Kaka, noted that the road was in a deplorable condition for long and commended the governor for putting it in good shape with good drainage system.

Also, the contractor that executed the road project, Joseph Adegbesan, lauded the governor for believing in the indigenous contractors, noting that the gesture, apart from encouraging the local contractors, also empowered the local people who supplied materials used in constructing the road.

While delivering the message of the Awujale and Paramount Ruler of Ijebuland, Oba Sikiru Adetona, the Dagburewe of Idowa, Oba Yinusa Adekoya, announced the endorsement of the Governor Abiodun second term bid, by all the monarchs in Ijebuland.

“You have worked assiduously these past three years and three months and you have justified why you deserve a second term in office.

“The message is clear. You have done very well by fulfilling the promises made to us in 2019. 2023 is sure and our people will vote overwhelmingly for you”, he assured the governor.

Speaking, the Ebumawe of Ago-Iwoye, Oba Abdul-Rasak Adenugba, said ‘though I am not a politician, the people of this ancient town have come to tell me that it is Dapo Abiodun they want and not anyone else. You have restored confidence in government and for keeping the promises made to us during the electioneering campaign”.

The monarch further appreciated the governor for embarking on reconstruction work on the road linking the university town to other Ijebu and Remo towns and villages.

The Orimolusi of Ijebu Igbo, Oba  Lawrence Adebajo, reaffirmed the stance of other monarchs in Ijebuland, submitting that “in the short period I have been an Oba, you have changed my perception about politicians as liars. Your words have been your bond. I can see the development you’ve brought into our towns.  We love you and our people have told me that year 2023  is yours without equivocation”.