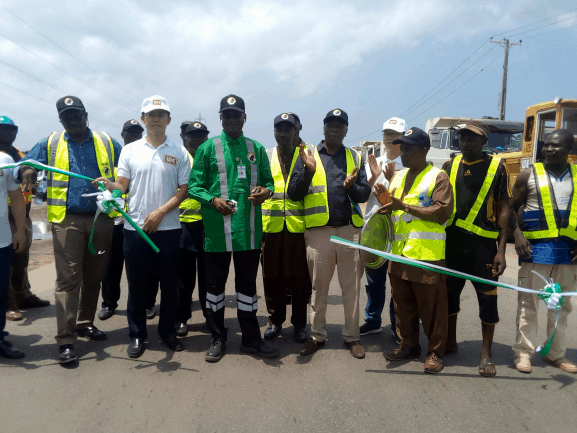 The Managing Director of the Federal Roads Maintenance Agency, Nurudeen Rafindadi on Wednesday, assured motorists of speedy completion of repairs on the Lagos-Badagry Expressway.
Rafindadi gave the assurance during the mini-flag off of the general maintenance of the Lagos-Badagry-Seme dual carriageway, Okokomaiko-Agbara sections at Igbo-Elerin on the highway.
He said that the government awarded the contract in May and was committed to making the portion under contract from Igbo-elerin to Agbara junction motorable.
He said that both the Federal Government and the Lagos State Government were doing repairs of the highway simultaneously from three sections to reduce hardship on the road.
He said:  “From Eric Moore to this point is being handled by Lagos State Government. The second section which is the middle section is from this point.
“For the next 12 km, FERMA will be doing repair maintenance works on the road and we should be done with it within the next six months to one year.’’
He said that the Federal Ministry of Works was also working on the third section of the highway from Agbara to Seme border.
He assured of strict supervision of the rehabilitation works, saying that the contractor was on ground and ready to quickly complete the work.
Rafindadi said that the contract sum was about N3.6 billion, saying that measures were in place to ensure that the rainy season does not affect construction works.
He said that there was synergy between the agency, traffic regulatory agencies and the state government to ease gridlock during the repairs.
He said that Federal Government also had plans to remodel the section but was working on modalities for relocation of gas pipelines, communication cables and other utilities In the Right of Way of the project.
Earlier, the managing director inspected repairs done on some sections of Ikorodu Road, ongoing drainage and road reconstruction projects at Karimu Street and Braimoh Street, Surulere.
He told newsmen that he was impressed with the level of completion of the construction of the sites, saying that repair works on Western Avenue had been completed.
The News Agency of Nigeria reports that the managing director, a team of FERMA and the contractor took a trip on the road to Agbara carrying out assessment of damage and type of materials to be used.
Alex Zhang, Managing Director, Wizchino Engineering Ltd., contractor of the project, said the firm was going to move an asphalt plant, mixers and other machines to site as well as deploy adequate staff on the project.
Zhang said: “We will do our best to do quality work because this road is so important not only to FERMA but to the Federal Government, Lagos State Government and the corridor links to Benin Republic.”
Some motorists, residents and business owners on the axis, who spoke with newsmen, appealed to the government to speed up rehabilitation works, reduce gridlock and suffering on the road.