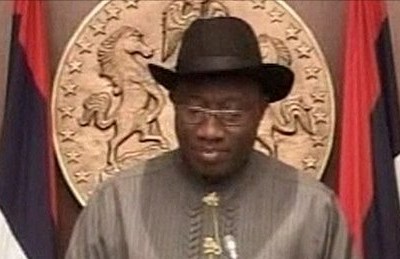 ECOWAS leaders on Tuesday in Accra, Ghana paid glowing tribute to President Goodluck Jonathan for his contributions to regional peace, security and overseeing the conduct of successful elections in Nigeria.

Speakers at the opening of the 47th Ordinary Session of ECOWAS Authority of Heads of State and Government hailed Jonathan for conceding victory to President-elect, Muhammadu Buhari, in the presidential election in Nigeria.

The one-day summit was Jonathan’s valedictory appearance at the regional summit as President of Nigeria before the May 29 inauguration of Buhari.

President John Mahama of Ghana, the Chairman of the ECOWAS, opened the torrent of tributes when he described Jonathan’s conduct in the aftermath of the elections as “a personal show of mature statesmanship”.

Mahama’s speech was greeted with a resounding applause to Jonathan by delegations at the summit.

He said: “I believe that his name (Jonathan) will be recorded in a special place when the history of Nigeria’s democracy will be written.

“Let me also on this occasion salute Gen. Muhammadu Buhari for his victory in the presidential election.”

The ECOWAS chairman expressed the hope that the successful conduct of the general elections in Nigeria and Togo would be replicated in forthcoming elections in Cote d’Ivoire, Burkina Faso and Guinea.

He said with the conduct of the elections in Nigeria and Togo, West Africa, had shown the world that the region could become a “world leader” in democratic governance.

In his remarks, ECOWAS Commission President, Kadre Ouedraogo, said ECOWAS had received increased credibility on the political front because of the choices made by Jonathan and Buhari in the conduct of the presidential elections.

Ouedrago commended both leaders for placing the general interest of the country above theirs.

He said: “In speaking particularly to President Jonathan, I wish to assure him that the commission will never forget his crucial contribution in the management and resolution of the crises in Guinea Bissau, Mali and Burkina Faso.

“As well as in the fight against the Ebola Virus disease, among other challenging matters.

“I am confident that nothing will come to make us forget the great pride Nigeria has brought us only a few weeks ago.”

Chambas said under Jonathan’s watch, Nigeria, Cameroon, Chad and Niger have continued to collaborate in the fight against Boko Haram.

The UN Secretary-General’s representative paid tribute to soldiers who lost their lives in the fight against Boko Haram terrorists and offered condolences to their families.

He said the UN would continue to support the joint efforts between ECOWAS and the Economic Community of Central African States to tackle terrorism.

NAN reports that ECOWAS is celebrating its 40th year of existence this year.

The regional leaders are expected to extend the mandate of the ECOWAS Security Mission in Guinea-Bissau and approve the 2015 budget for the mission.