CJN urges justices of the Court of Appeal to shun corruption 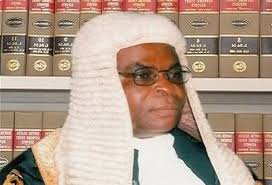 The Acting Chief Justice of Nigeria, Justice Walters Onnoghen on Friday urged Justices of the Court of Appeal to shun corruption.
The acting CJN gave the charge on the occasion of 2016 Court of Appeal Justices conference in Abuja.
Onnoghen said the recent unprecedented assault on the judiciary called for self-examination and purging of consciences of judicial officers.
Onnoghen said: “As traumatic as the recent assault on some judges may have been, it should be seen as an opportunity for the judicial officers to re-affirm their commitment to the rule of law.”
He said judicial officers must, however, continue to uphold the tenets of independence of the judiciary with integrity and fairness in the discharge of their official functions.
He said: “In performing those functions, however, we must resist external intimidation. Judges should reframe taking wrong decisions or steps as such decisions have far reaching consequences in the country’s justice system.
“The battle for the soul of the judiciary can only be fought and won from a position of integrity, judicial independence and fairness.
“The annual conference of the Court of Appeal is not just a yearly court ritual, but a significant time when the justices come together to review performances and have frank exchange of ideas.
“I charge you to engage on profitable interactions to map out strategies for more effective work.”
Justice Zainab Bulkachuwa, the President of the Court of Appeal expressed delight on the conduct of all the justices of the court so far.
She said senior judicial officers of the court and the entire work force were committed to improving service delivery.