Buratai thanks Buhari for rapid development of Army, troops welfare 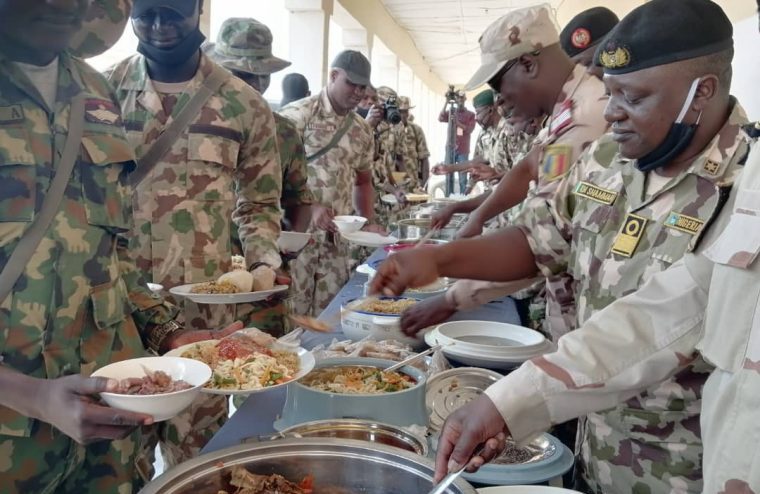 The Chief of Army Staff, Lieutenant General Tukur Buratai, has thanked President Muhammadu Buhari for his unflinching support to the Nigerian Army.

Buratai stated: “The Nigerian Army has in the past five years witnessed rapid development in terms of its equipment holding, infrastructural development and welfare of troops with the numerous supports from the Commander-in-Chief.”

Buratai said this through the Chief of Training and Operations of the Nigerian Army, Major General EO Udoh, who represented him at the Chief of Army Staff 2020 Eid-el-Kabir Sallah Luncheon with troops of Super Camp 14 Damasak in Borno State on Saturday.

At the occasion, Buratai expressed happiness for the Theatre’s tremendous successes over Boko Haram criminals and their international and local collaborators as well as their auxiliaries.

According to him: “Although a lot of progress has been made in containing the threats posed by the insurgents, more needs to be done to maintain control over the liberated territories and to fully establish government authority in all areas within the North East region.

“We must remain poised to ensure the final defeat of the terrorists and to resist any attempt by the criminals to reestablish control in the liberated area.”

Buratai also reminded the troops that additional vehicles and fighting equipment have been injected into the Theatre in the last one year, adding that the Nigerian Army had taken delivery of additional weapons and armaments of different calibers that will soon be injected into the mission area.

He used the opportunity to acknowledge the resilience, selfless service and doggedness of troops of Army Super Camp 14 Damasak in particular and 5 Brigade in general for their efforts at securing their Area of Responsibility in the face of daunting terrorists’ threats.

He commended troops of the Theatre for their sacrifice, gallantry and patriotism in the face of daunting challenges.

Earlier, the Commander, Multi National Joint Task Force N’Djamena, Major General IM Yusuf, in a goodwill remarks at the event appreciated the Chief of Army Staff for inviting him to be at the occasion and for making Sector 3 Damasak to host the Luncheon, stating that the super camp Damasak is part of the MNJTF and also part of Sector 3 Nigeria.

Yusuf said the troops of the Sector/Super Camp have been doing very well in the counter terrorism operations both as part of Sector 3 Nigeria and as part of the MNJTF.

He used the opportunity to commend the unity of purpose and the cohesion between and among the troops of the MNJTF.