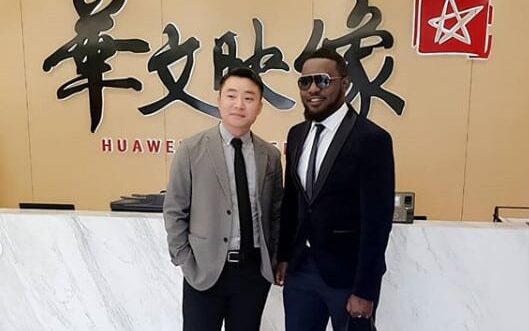 Nigerian comedian, actor and film producer, Ayodeji Richard Makun, aka AY, has bagged a deal with the Huawen Movie group in China to collaborate on the making of his next project: “30 Days.”
This would be the first deal championed by AY in collaboration with Chinese film industry and Nigerian Nollywood industry.
In an Instagram post by AY: @aycomedian, who was recently in China, the film producer and actor revealed that he had a meeting with executives of Huawen Movie Group.
He captioned the picture of himself at the Chinese office of the media group, where he wrote: “We are looking at a brighter future for Nollywood.”
He said he was joined on the journey by Mr. Wang, Chairman Huahua Media, and Moses Babatope of Filmone Entertainment.
In a chat with CNN Africa, Babatope said the Chinese collaboration will open up Nollywood to Chinese cinema audience and create better quality movies.
“We will be exposed to a worthwhile and moving Chinese film market. It’s like skipping many hurdles and getting access to an existing mature market,” Babatope said.
AY’s entry into Nollywood was with the production of “30 Days in Atlanta.”
The production, shot in collaboration with the Atlanta Government, was an epic that paved the way for Nigerian comic films in cinemas.
“30 Days in China” joins Makun’s comedy franchise, which includes “30 days in Atlanta” and “10 days in Sun City,” where he films adventures in new countries.