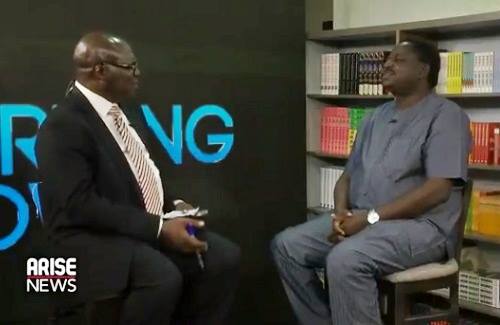 Dr. Reuben Abati, former Special Adviser on Media and Publicity to ex-President, Dr. Goodluck Jonathan, last week played host to his successor and Special Adviser, Media and Publicity to President Muhammadu Buhari, Femi Adesina, as guest on his morning show on Arise TV.
The programme had discussion on the Buhari Administration, getting to the level of comparison once in a while on how the Jonathan Administration handled some issues that are at present confronting the country.
One of such issues was the handling of the Boko Haram insurgency and the kidnap and release of schoolgirls by the terrorists.
While about 300 schoolgirls were captured by Boko Haram from a Government Girls Secondary School in Borno State during the Jonathan Administration, 110 schoolgirls were taken from a school in Dapchi, Yobe State by the insurgents.
So far, about 105 girls have been returned from the Dapchi kidnap, while the case in Borno State had not recorded as much success.
Arise TV is owned by the Publisher of THISDAY newspaper, Nduka Obaigbena.
Obaigbena is also the President of the Newspapers Proprietors Association of Nigeria.