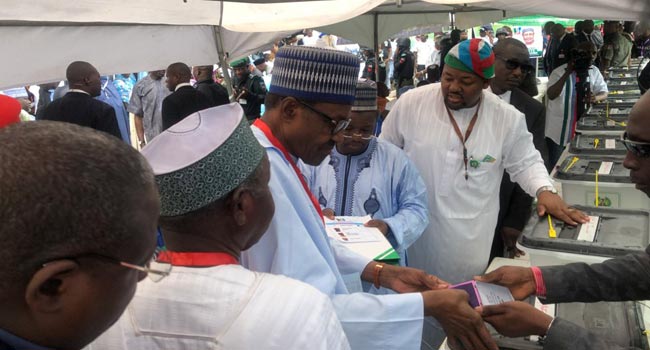 Three governors elected on the platform of the All Progressives Congress on Sunday displayed their skills to the delight of their colleagues while dancing to a song by a popular Hausa musician, Rarara.
The News Agency of Nigeria reports that Governors Nasir el-Rufa’I of Kaduna State, Jibrilla Bindow of Adamawa State and Yahaya Bello of Kogi State joined other APC supporters in a carnival-like scene at the 2018 National Convention of the party at the Eagle Square, Abuja to dance to the tune.
Rarara, from Kano State, is a staunch supporter of President Muhammadu Buhari and the APC.
The musician has so far successfully released many songs, praising and highlighting the achievements of the Buhari administration in the past three years.
Rarara and other musicians were called upon to entertain an unprecedented crowd of party faithful who were awaiting the results of the elective National Convention.
The voting, which started on Saturday, ended on Sunday.
Former Edo State Governor, Adams Oshiomhole, and incumbent National Secretary of the party, Mai Mala Buni, were affirmed as elected by the party’s delegates from 36 states and the Federal Capital Territory.
Oshiomhole became the APC sole chairmanship aspirant after Prof. Oserheimen Osunbor and Chief Clement Ebri, both former Governors of Edo and Cross River States, and another aspirant withdrew from the race.
The tenure of the Chief John Odigie-Oyegun-led 21 member National Working Committee of the APC ends on Monday (today).