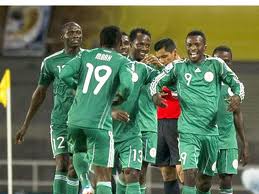 The Flying Eagles were on Saturday barred from training at Tanzania’s National Stadium in Dar es Salaam, ahead of their Sunday’s first leg African Youth Championship match against the Ngorongoro Heroes of Tanzania
This was contained in a statement issued by the team’s Media Officer, Samm Audu.
The statement said that the National U-20 team was barred by stadium officials, who insisted that the team would not train on the stadium’s pitch on Saturday morning.
The Flying Eagles will take on hosts, Ngorongoro Heroes of Tanzania, in a 2015 AYC qualifier on Sunday.
The statement said that the team was forced to train on another pitch, away from the Tanzania’s National Stadium.
It added: “The Nigeria U-20s therefore had to make do with the sides of the artificial pitch at the other wing of the National Stadium.
“After the stones were picked out by both players and officials, the team worked out for an hour and half to round up their preparations for Sunday’s AYC qualifier.”
The Assistant Coach, Nduka Ugbade, at a news conference on Saturday morning after the training, said that the team would not make the mistake of underrating their hosts.
Gbade said: “There are no longer small teams in the game.
“Sunderland defeated Chelsea in the EPL and little Togo qualified for the 2006 World Cup.
“It would therefore be foolish of us to come here believing we can overrun Tanzania, who we are told, like to play football.”
The assistant coach said that except the incident at the stadium, everything was fine, adding that the team were very much at home in Tanzania.