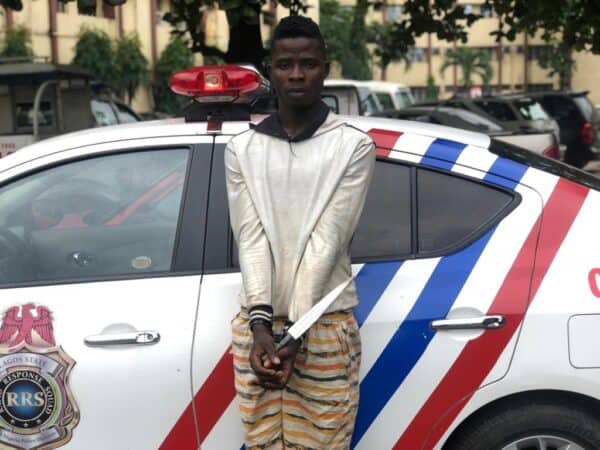 A robbery suspect arrested by the operatives of the Rapid Response Squad of the Lagos State Police Command for using tricycle to rob a television presenter has disclosed that he was paid N8,000 for every  obbery operation he participated in with the gang.
The suspect, Timileyin Adebayo, 23, in company of three other suspects, now on the run, had on July 12, 2019, while pretending to be passengers in tricycle, popularly called keke, used knives and cutlass to dispossess a lady of her belongings.
In his confession to the police, Adebayo stated that his gang members included: Olabanji, Ahmed and Lekan.
He added: “The operation was my fifth robbery with the gang.
“I joined them this July and for each of the operation, they gave me N8,000 only.
“No matter what we made, that is what they gave me.
“May be, because I just joined the gang.
“They don’t treat me as one of them at all.
“I was asked to join the gang by one of them after one of their gang members pulled out.
“They had been operating for a long time before I joined them.
“I was a bus conductor.
“I had no job.
“They promised to assist me and that was when they invited me to join the gang.
“We rob between Coca-Cola and Ogba and Ikeja to Ogba.
“We use two knives and a short cutlass.
“I collect phones and belongings of our victims,”
According to the television presenter, who did not want her name in print: “Around past 10pm I was standing at Coca-Cola Bus Stop, Ikeja when their Keke came.
“I boarded it hoping to drop at Ogba.
“They were all men.
“I didn’t suspect anything because there were other Keke there.
“I noticed that as soon as the driver linked Wempco Road, the two passengers at the back and the one sitting down in front brought out knives and cutlass and threatened to kill me if I did not cooperate with them.
“They collected my two phones, my handbag, jewelry and some money, I can’t even recollect how much it was.
“They then pushed me out of the keke while on speed.
“I was struggling to get up to avoid oncoming vehicles from hitting me.
“ne bike man assisted me and we were on their tail.
“We caught up with them on Akilo Road, and unfortunately for us, they used their keke to hit us.
“This was the point RRS patrol team saw us and chased the robbers.
“They abandoned their keke and fled in different directions but they got that one (pointing to the suspect).”
Recovered from the robbers were a tricycle and a dagger.
The Commissioner of Police, CP Adamu Muazu, in his reaction to the development directed the transfer of the case to State CID office and ordered the immediate arrest of other members of the gang.