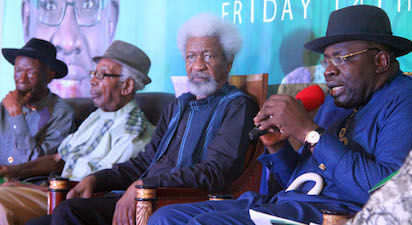 Nobel laureate, Prof. Wole Soyinka, and the Bayelsa State Governor, Seriake Dickson, on Friday said Nigeria was negotiable.
They stated this at an event tagged: “A Day with Nobel laureate, Prof. Wole Soyinka, and Ijaw Literary Icons.”
The event was part of the activities marking the inauguration of the Ijaw National Academy, Kaiama, Bayelsa State.
Soyinka said the assumption that Nigeria is non-negotiable was a falsity, insisting that anything, including the country’s unity, was negotiable.
He, however, said what could not be negotiated was the right of the people to determine their future.
Soyinka, while fielding questions from students of the academy and a renowned poet, Odia Ofiemun, on whether Nigeria should break up or not, insisted that such an argument sounded “hypocritical, dogmatic and dictatorial”.
The Nobel laureate said: “My response is basically a plea: we must stop confusing or mixing up the argument.
“When people come up with the question of whether to break up or not to, it always sounds hypocritical, dogmatic and dictatorial.
“And for the statement that the unity of Nigeria is non-negotiable, that, for me, is a falsity.
“Anything is negotiable.
“The right of people to determine their future is what is non-negotiable.
“Most nations came into being through negotiations.
“Sometimes, when people say negotiate, what they really mean is to restructure.
“What the argument or question should be is: should Nigeria break up?
“And my answer to that is no.
“But please, don’t tell me that Nigeria as it stands is non-negotiable.
“For me, this is a fallacy.
“The nation has got to be negotiated.
“Negotiation includes ensuring that there is no marginalisation.
“Negotiation has to do with control of resources.
“It has to do with restructuring the nation in a way in which its components, its constituents are not feeding a bloated centre to the detriment of their own development.
“So, Nigeria is negotiable.
“So, what we should say, the language we should use is: what are you willing to sacrifice, what efforts are you willing to make to ensure that Nigeria remains intact?
“That is the citizen question.”
Dickson agreed with Soyinka’s submission, saying the country should be restructured or negotiated.
He said: “I believe that just as Soyinka has said, if you ask the question on whether Nigeria should continue to exist as a united country, the answer you will get from the majority is yes.
“I believe that the continued existence of our nation, as an indivisible entity, is desirable.
“There is a very strong case to be made for that.
“After all, you and I, our people, have been funding the Nigerian experiment for the last 61 years.”
Meanwhile, a former Head of State, Gen. Yakubu Gowon (retd.), and his wife, Veronica, were in the state to inaugurate some projects, including the new Governor’s Office in Yenagoa.
Gowon also inaugurated the Ijaw National Academy at Kaiama and a 1,000-capacity secondary school.