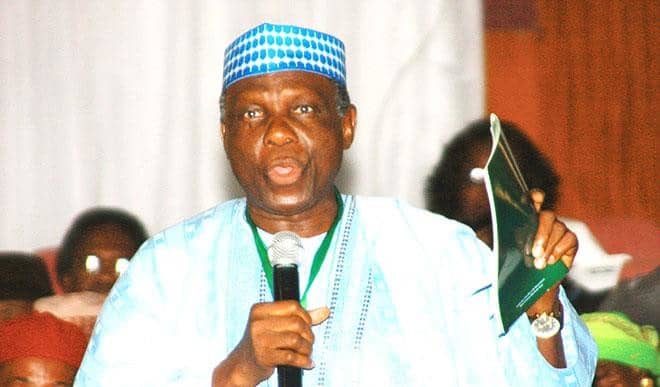 Prof. Jerry Gana, a one time Minister of Information and National Orientation, says national identity is a key factor towards addressing Nigeria’s development challenges.
Gana stated this at the maiden edition of the School of Government and Politics lecture series on Thursday in Abuja.
SOGP is an Abuja-based non-partisan leadership development institution aimed at producing nation builders and positive role models in government and politics.
In the lecture titled “Towards a National Identity”, Gana said Nigerians should desist from living in denial and admit the fact that thing have gone wrong in the country.
At the heart of the country’s challenges, according to him, is “a serious conflict of national, regional, local, ethnic, religious, and perhaps ideological identities”.
He added: “National identity defines the citizens or people of a nation, based on distinctive cultural, social or even ideological characteristics.
“Thus building a national identity would involve nation-building and the derivation of some characteristic core values, principles and behaviour patterns.
“For a country like Nigeria with numerous ethnic nationalities, the most fundamental action is how best to create a nation-state and then derive a distinctive national identity.”
Gana identified seven development issues that the country must prioritise to attain sustainable development.
These include true federalism, cultural transformation, quality education, democratic consolidation, quality leadership, good governance and spiritual rebirth.
He noted that Nigeria’s brand of federalism characterised by over-concentration of powers and resources at the centre had encouraged corruption, bad governance and created unnecessary tension within the polity.
On cultural transformation, she said that culture was a critical element of the process of building a national identity.
He said: “May I urge that we take matters of how best to transform our various cultures very seriously. Transformed cultural attitudes and practices will address serious obstacles to nation-building.’’
He urged government at all levels to prioritise provision of quality education, which he described as a “powerful tool” in changing the minds of the people in positive ways.
He urged leaders at all levels to muster the political will to strengthen the country’s electoral process, adding that it plays key role in nation building.
Gana called for a spiritual rebirth among Nigerians, noting that “the most powerful way to transform a nation is through the word of God applied by the Holy Spirit’’.