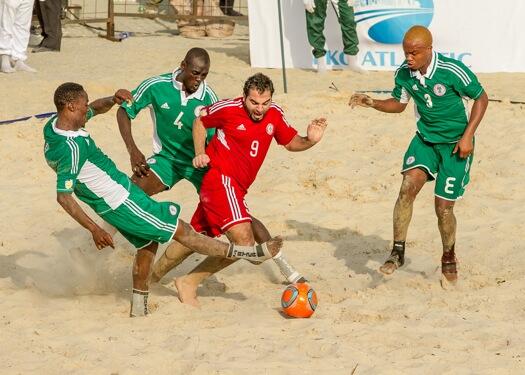 Two-time African champions Nigeria will begin their campaign at this year’s FIFA Beach Soccer World Cup finals in Paraguay when they clash with world number two Portugal in Asuncion on Friday.
This year’s finals will hold at the Los Pynandi World Cup Stadium – named after the Paraguayan national beach soccer team – and located at the headquarters of the Paraguayan Olympic Committee in Greater Asuncion.
Nigeria earned a ticket to feature at the 16-team World Cup finals after finishing second at the CAF Beach Soccer Cup of Nations held in Egypt in December 2018.
Champions Senegal is the other team flying Africa’s flag in Paraguay.
This year’s finals will kick off on Thursday and end on December 1.
Nigeria’s delegation of players and team officials flew out of the country on November 8 in order to participate in an eight-nation pre-competition tournament that took place in Asuncion from November 12 to 16.
The Supersand Eagles defeated the Tahiti national team 9-4 during the pre-tournament event, after losing 3-7 to host Paraguay.
On Monday this week, Coach Audu ‘Ejo’ Adamu and his wards moved into their Dazzler Hotel World Cup accommodation in Asuncion, and have been training hard as they countenance an interesting encounter with the world number two team on Friday
Nigeria, winners of the African title in 2007 and 2009, and quarterfinalists at the World Cup in 2007 and 2011, will campaign in a fierce Group D that also has world number one team, Brazil, and Oman, ranked number 14 in the world.
Nigeria is ranked 21st in the world.
Host nation Paraguay will tackle Japan in the tournament opening game on Thursday.
After their first game against Portugal on Friday, the Supersand Eagles take to the beach against Oman on November 24 and then against Brazil two days later.
Head Coach Adamu has listed veterans Abu Azeez and Victor Tale in his final squad of 12, with Emmanuel Ohwoferia, Emeka Ogbonna, Godspower Igudia, Dami Paul and Taiwo Adams also in.
Godwin Tale (Victor’s younger brother), Egan-Osi Ekujimi, Babatunde Badmus, Godwin Iorbee and Hameed Kareem are the other names on the list.