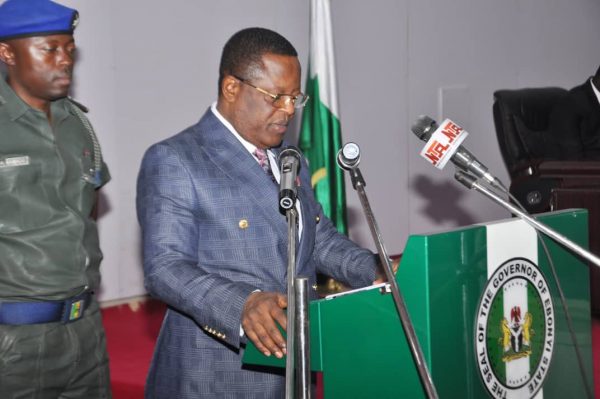 Share
Facebook Twitter LinkedIn Pinterest Email
Governor David Umahi has presented a total appropriation Bill of N188,401,913,868 to the State House of Assembly for the 2019 fiscal year.
The Bill, which he christened: “Budget of Divine Fulfillment,” was lower than that of the outgoing year, put at N208.33 billion.
Delivering the document at the main chambers of the State Assembly on Tuesday, Umahi explained that the 2019 Budget has expenditure ratio between recurrent and capital expenditure at 22.1 per cent to 77 per cent, with recurrent expenditure gulping N41.556 billion and capital expenditure N146.84 billion
He noted that the current budget was geared towards taking care of recurrent expenditure as well as addressing all ongoing capital projects across the State.
He analysed that the sum of N15.443 billion was allocated to personnel cost under recurrent expenditure, while N16.114 billion went to overhead cost and N4.32 billion to cater for grants to higher institutions.
Under capital expenditure, the economic subsector got the largest junk of capital procession at N89.968 billion under which Works and Transport received N53.050 billion, followed by Lands and Housing at N6.42 billion and N35.5 billion was shared among the other components of the subsector.
The Social subsector, which came second, got a provision of N39.918 billion under which education got N14.35 billion and health N13.61 billion, with N11.949 billion shared among other social sector components.
Umahi explained that the reason behind allocating the largest junk of the capital fund to Works was based on Government’s commitment to constructing more flyovers, roads, water reticulation and other infrastructural innovations.
According to  him, major new capital areas of focus on included construction of a modern airport in the State, a teaching hospital and a world class Sports Stadium.
Provisions were also made for the full construction of the old Abakaliki Ring road, dualizatiion of the Abakaliki-Enugu Expressway and the Abakaliki-Afikpo Road, among other road projects, while Government would establish a modern printing press to cater for its printing and publishing businesses.
He added that efforts would be intensified to fully digitise the State Radio and Television Station, Ebonyi Broadcasting Corporation, while training and retraining of the staff would be taken seriously.
He assigned 12 per cent of the total budget to Education, adding that the fiscal year would witness mass renovation of schools and other education enhancement programmes.
Umahi also revealed that economic empowerment would be widened in scope to encompass human capital development.
Consequently, a new Ministry of Human Capital Development would be created to replace the existing Ministry of Economic Empowerment.
The sum of N800 million was set aside for the commencement of the National Health Insurance Scheme in the State, while ongoing projects in Primary Health Care across the State would receive added vigour.
Apart from specialized unutilized fund accruing to the State, amounting to N22.441 billion, Umahi further explained that the major source of fund for the budget are as follows: Statutory Allocation estimated at N99.76 billion, representing 23 per cent; and Internally Generated Revenue, put at N10 billion, representing 5.3 per cent.
Other sources included expected loan of N50.2 billion from the African Development Bank meant specifically for the ring roads and N6 billion expected to come from sources other than the above named.
Governor Umahi emphasized that Government intended to increase tax revenue in the 2019 fiscal year by diversifying into other untapped revenue earnings in land property, personal income taxes and the likes.
Speaking on the 2018 budget, Governor Umahi expressed the satisfaction of the entire Executive Council with the level of its performance and implementation, attributing its successes to financial discipline.
Governor Umahi however, regretted that the 2018 budget witnessed a lot of hiccups ranging from global economic instability occasioned by persistent incidence of terrorism and other challenges to dwindled statutory allocation owing to unstable oil revenue accruable to the Federal Government, which affected every sector of the state economy simultaneously.
Meanwhile, in spite of the paucity of fund, the Governor said the state pursued the implementation of the 2018 budget with resilience and determination, which ensured the attainment of most of the ambitious targets as could be witnessed in the areas of quality infrastructure, agriculture, human empowerment and welfare; health, education and other key sectors.
He concluded that the 2019 budget was carefully prepared to reflect the economic realities and pledged to continue to surpass expectations through effective and prudent management of the State’s limited fund to continue to deliver best governance to the State.
The Speaker of the Ebonyi State House of Assembly, Francis Nwifuru, in his opening remarks extolled the Governor’s prudence in the management of the State’s resources, describing it as the magic behind the massive infrastructural development in the state.
He noted that the synergy between the executive and the legislature has provided the  enabling environment for the State to excel above her contemporaries, while placing her on a higher pedestal of economic boom.
Nwifuru noted that despite the hard bite of economic challenges, Ebonyi State has remained on the rise through robust and healthy management of resources by Umahi, and discouraging profligacy in governance.
Meanwhile, Governor Umahi had earlier in the day, during a brief Executive Council meeting assented to the National Health Insurance Scheme Bill to address health needs of the state’s civil servants.
He explained that assent to the bill followed its passage by the State House of Assembly.
He added that the law, when fully implemented, was expected to address all health needs of the civil servants and give them and their families better and cheaper access to  medical care.
The 2019 Appropriation Bill as presented by the Governor passed the first and second reading the same day on the floor of the House, consequent upon its acceptance motion moved by the Chief Whip, Chile Ogiji, and seconded by France Okpo.
2018 Budget Chile Ogiji David Umahi Ebonyi State House of Assembly France Okpo Francis Nwifuru
Share. Facebook Twitter Pinterest LinkedIn Tumblr Telegram Email