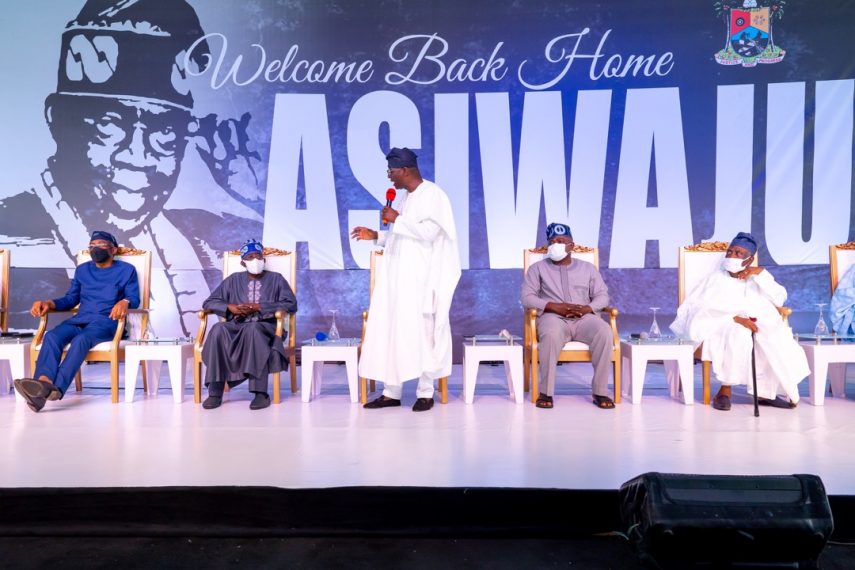 The National Leader of the All Progressives Congress, Asiwaju Bola Ahmed Tinubu, says God can give power to anyone he wishes.

The former Lagos State Governor said this at the Lagos House on Sunday as he reunited with his political associates and proteges.

This was at a welcome-back event and prayer hosted by Governor Babajide Sanwo-Olu.

The event was Tinubu’s first outing since his return from the United Kingdom on Friday night after three-month absence from the country.

The APC National Leader said what God expects from anyone he gives power to is that such a person uses it for humanity.

He said the prayer event was an emotional one for him, being overwhelmed by good wishes from Nigerians while he was away.

According to him, all prayers showered on him are taken as valuable compliments.

He said: “I am a little emotional now but I am happy.

“God is the giver of life and the only one who can take life.

“And He (God) says if I grant you power and the privilege in this life, I am the only one who can take it from you if you don’t use it in the way and manner that promotes humanity.

“It is the same God that has spared us till today and has given us the privilege that I give glory to because I am standing before you hale, hearty and well.

“Today is a day of joy for me, having fixed today for this great event.

“We are here giving praises to God.

“May God bless all of you in attendance.

“I cannot say more than that today.

Sanwo-Olu said Tinubu’s return was more than cheery news for his supporters across the country, noting that the former Lagos State Governor had been rejuvenated with renewed vigour for his next political move.

He said there were countless reasons to be grateful to God for bringing Asiwaju back home, fully rejuvenated.

He said: “Since Friday when our leader and father came back, it has been a joyful moment for the teeming residents of Lagos, his supporters and Nigerians across the country.

“We give glory to God who brought you (Tinubu) back with sound health and stronger vigour.

“On behalf of all political office holders, party leaders and faithful, we welcome our leader back and we give praises to God on his behalf that the intention of evil-minded people who spread malicious rumour against our leader did not materialise.

“This event shows Asiwaju is healthy and possesses more energy to embark on his next move in politics.”

Lagos State Deputy Governor, Dr. Obafemi Hamzat, said that Tinubu’s return deepened his associates’ belief in God as the APC National Leader’s full recovery from the knee surgery was a sign of strength and favour from God.

“Now that Asiwaju is back, we are ready for work. The work has started and we are committed to doing it,” Hamzat said.

Members of the State Executive Council, Governor’s Advisory Council and council chairmen were also in attendance.

Gbajabiamila, who spoke on behalf of the National Assembly members, described Tinubu as “an eagle” who was focused and always ahead of the game.

The Speaker said he wondered why a “simple knee surgery” became a national issue, but the solidarity shown towards Tinubu across ethnic divides indicated that the APC National Leader is an enigma.

Obasa called Tinubu a teacher and benefactor, saying his return has put the malicious rumour against him to rest.

The Chairman of Conference 57, Kolade Alabi, described the event as ‘symbolic”, adding that members of the Conference were ready to join Tinubu in his next political move.

Prayers were offered for Tinubu by Muslim and Christian clerics.