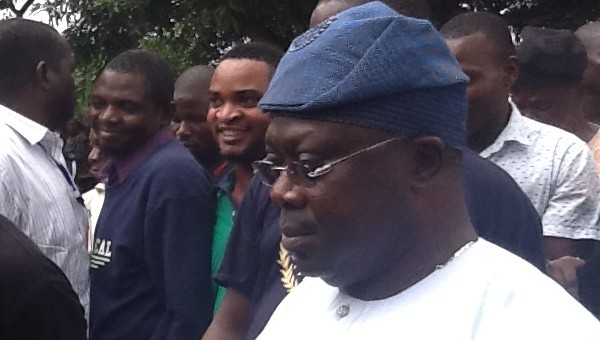 Senator Iyiola Omisore, the Social Democratic Party governorship candidate in September 22 election in Osun, has agreed to work for the ruling All Progressives Congress in Thursday re-run election in the state.
Omisore made this known at a news conference attended by the National Chairman of SDP, Prof. Yemi Farounbi, on Wednesday in Ile-Ife.
Ife North and Ife South, believed to be the political stronghold of Omisore, is part of the four local governments that governorship re-run election will take place.
Omisore came third with 128,049 votes during the last Saturday governorship election.
The News Agency of Nigeria reports that the Returning Officer for the election, Prof. Joseph Fuwape, declared the election inconclusive.
He said the margin between the leading candidate 353 votes was lower than number of registered voters in the affected areas.
Since the declaration of the election inconclusive in the two local government areas, APC and bigwigs have been patronising Omisore to support them in the Thursday rerun election.
Omisore said decision of APC to accept his party manifestoes led to the coalition.
Omisore said SDP was left with no option than to pitch tent with APC, after PDP failed to respond to his party terms and condition for a coalition government among other reasons.
He said: “We have accepted to support the APC for victory in the rerun election tomorrow and thereafter form a coalition government.
“Our conclusion to form a coalition government is based on the party that is ready to work with SDP to adopt and implement the core values of our party.”
He listed the core values of SDP as social justice, equality and good governance.
He said: “Our core values and philosophy, as indicated in our SDP manifestoes, have all been presented to APC and PDP.
“APC has since come back to accept all the conditions proposed to them by us, to form a coalition government while the PDP is yet to respond.
“We now therefore, as a party, accept to support APC for victory in the re-run election tomorrow and thereafter form a coalition government.”
The PDP candidate, Ademola Adeleke, led the race with 254,698 votes, 353 votes more than his closest rival, Gboyega Oyetola of the APC.
The margin was, however, less than the 3,498 votes in the polling units where voting was cancelled.
Consequently, Afuwape declared the election inconclusive and ordered a re-run.
The re-run will take place in three polling units in Orolu Local Government Area, one polling unit in Osogbo Local Government Area, one polling unit in Ife North Local Government and two polling units in Ife South Local Government Areas.