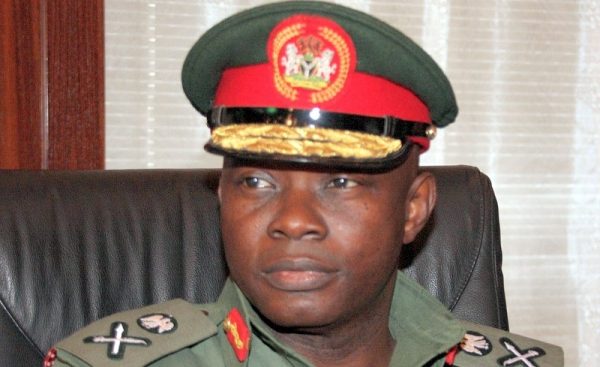 The Chief of Defence Staff, General Gabriel Olonisakin, has commended the Nigerian Army for its research and development effort as well as innovation leading to the production of made in Nigeria military hardware
Olonisakin gave the commendation during the tour of Nigerian Army research and development exhibition at the ongoing 2019 Chief of Army Staff Annual Conference on Thursday in Kaduna.
He said the decision of Nigerian Army to explore the full potential within its ranks to come up with reputable innovations would be a boost to ongoing counter insurgency operations.
He said: “It is in this regard that I wish to recognise and also commend the sterling efforts of the Nigerian Army under the dynamic leadership of the Chief of Army Staff.
“Undoubtedly, the Nigerian Army with vast experience in human resources is presumed to be at the driving seat in actualising a good success in the research and development project.
“Accordingly, the place as well as intended benefits of research and development in Nigerian military is even more significant in contemporary times considering the myriad of security challenges confronting the nation.
“This is coming at a time when modern armies are compelled to think outside the box and develop local initiatives through research and development in order to change the narratives.
“This is consistent with the Nigerian Army’s stride in research and development initiatives.”
Olonisakin said the recent launch of the Nigerian Army infantry patrol vehicles, Ezugwu MRAP, which was fabricated using local engineering experts within the Nigerian Army in collaboration with its partners, was heartwarming.
He added that the Nigerian Army’s giant stride had turned on the new vista of opportunities for the country to become a global competitor in the manufacture of military hardware.
He added: “Therefore, the proper harnessing of this effort will help to facilitate the commercial production and sale of defence equipment and ultimately become a source of foreign exchange earning for the nation.
“The Boko Haram insurgency in particular has provided an appropriate impetus for the Nigerian Army to seriously task the ingenuity of its personnel and come up with innovative ideas to address the current terrorism challenge.
“This is particularly worthy of note because even the terrorists are known to be innovative with captured weapons in the pursuit of their nefarious activities.
“Additionally, with the resources allocated by the Nigerian Government for defence, it is incumbent for Nigerian Army to look inward and pursue this noble initiative in research and development with a view to surmounting insecurity across the nation.”
The Chief of Army Staff, Lieutenant General Tukur Buratai, while welcoming Olonisakin, said the initiative started in 2016 at the first research and innovation summit and exhibition in Abuja.
Buratai said the Nigerian Army was proud that its research and innovation effort had progressed with the successful production of Ezugwu MRAP and other infantry patrol vehicles.
He said: “The MRAP is quite comfortable, it is comparable if not slightly higher than some of the MRAPs that we imported or procured from abroad.
“It has the cutting edge technology which has been added to this version of our MRAP vehicle.”
The News Agency of Nigeria reports that the vehicles were fabricated and produced by the Defence Industries Corporation of Nigeria and Command Engineering Depot in Kaduna, using 70 per cent local content and 100 per cent indigenous engineers.
The theme of the conference was: “Application of the Cutting Edge of the Nigerian Army in Tackling Contemporary Security Challenges.”

NIPOST must be made profitable — Postmaster General