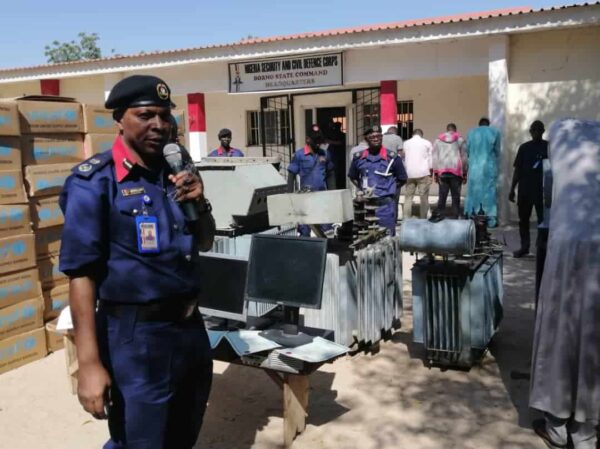 The Borno State Command of the Nigeria Security and Civil Defence Corps has paraded two men over alleged diversion of learning materials distributed to displaced pupils by the UNICEF.
The Commandant of the Corps, Ibrahim Abdullahi, made the disclosure while parading the suspects on Thursday in Maiduguri.
Abdullahi disclosed that the suspects were arrested while in possession of 86 cartons of assorted learning materials in Maiduguri on October 4.
He said preliminary investigation indicated that the items were donated by the UN agency to the Borno State Universal Basic Education Board for distribution to primary schools in Guzamala Local Government Area of the state.
He said: “Further investigation linked the crime to one suspect (name withheld) currently at large.
“The educational materials are meant for Guzamala Local Government Area.
“Each carton contains learning materials for a teacher and 40 pupils, thus depriving an estimated 3,440 pupils and 86 teachers of the items.”
According to Abdullahi, the command has arrested 10 other suspects over various offences in the past one month in the state.
Abdullahi revealed that one suspect was arrested in Maiduguri while trying to dispose 13 meters of vandalised electrical cables to one buyer.
He said the command also recovered four vandalised transformers from the suspects.
The commandant said the command also arrested a car vendor (name withheld) for allegedly defrauding four of his clients, forgery and leasing out vehicles without the consent of the owners.
Abdullahi noted that the command recovered three vehicles from the suspect.
He added that two herdsmen were also arrested over destruction of farm produce and threat to cause injury to farmers in Maiduguri.
He said: “After proper investigation, both parties agreed for alternative dispute resolution and the herdsmen agreed to pay compensation to the affected farmers.
“One of the suspects will pay N20,000, while the other is to pay N15,000 as compensation for damage caused to the farmlands.”
Abdullahi disclosed further that the command also arrested two suspects over alleged production of fake Identification Cards, statement of results and fake Senior School Examination certificates.
The News Agency of Nigeria reports that the commandant handed over the learning materials to the officials of the UNICEF and also presented the seized vehicles to the owners.

ABOUT US
Contact us: [email protected]heeagleonline.com.ng
FOLLOW US
© The Eagle Online is published by Premium Eagle Media Limited.
We use cookies to ensure that we give you the best experience on our website. If you continue to use this site we will assume that you are happy with it.Ok