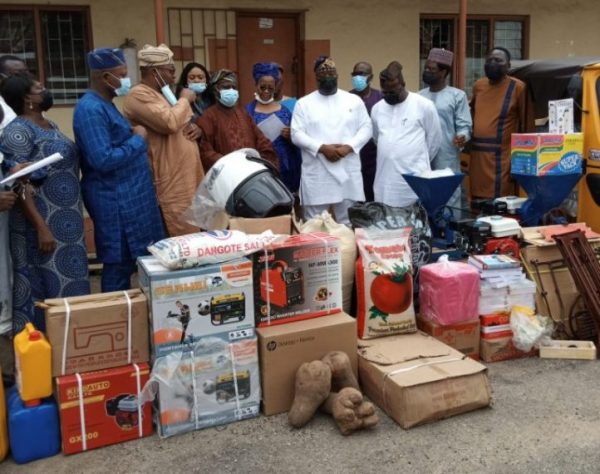 Dr. Bashir Jamoh, Director-General, NIMASA, while presenting the items, said the donation was part of the agency’s Corporate Social Responsibility.

Represented by Olamide Odusanya, Head, Internal Audit, NIMASA, Jamoh said the items would alleviate the sufferings of the underprivileged, help them to become self-reliant and by so doing eradicate poverty gradually in the society.

He noted that some of the items included food to empowerment equipment, tricycles, educational materials, health items and others.

He said: “It is customary in the agency to donate and provide empowerment items to displaced victims of insurgency across the country and Lagos being our host community, we deemed it fit to extend hands of fellowship and gesture to existing vulnerable people.

“You will agree with me that corporate social responsibility and empowerment have been entrenched to becoming a standard practice and this has been integrated into the agency’s DNA and so the need to invest in communities all over Nigeria.

“Empowerment plays a vital role in building and developing a nation.

“Basic right such as education, nutrition, health are luxury for millions of people across the globe, hence the agency with the support of the director-general has deemed it fit to bridge the gap by assisting.”

Jamoh noted that everyone was expected to play a role, which they had done and that of Lagos State was to ensure equal distribution of the items to the vulnerable in the society.

He urged the beneficiaries to act in good faith and ensure appropriate use of the disbursed items.

He said: “We have been to Enugu, Anambra, Kebbi and so many states.

“This is an ongoing exercise and we will continue until it goes round the 36 states of the federation.

“We are investing in people but we also want to invest in infrastructure to have growth and development.

“We want to do more.

“The little that we are doing now will go a long way to satisfy the basic needs of people.”

Gboyega Shoyowo, Deputy Chief of Staff to the Lagos State Government, while receiving the items, appreciated NIMASA’s efforts on behalf of the Governor of Lagos State, Babajide Sanwo-Olu.

Shoyowo said: “I hereby accept all these items that vary from food items to some empowerment equipment, tricycles, educational materials and others for the Internally Displaced Persons (IDPs) in Lagos State.

“We appreciate the Director-General’s efforts in supporting IDPs around the federation and we hereby guarantee that these items will reach the designated people as planned.”

He said all items received had been audited for proper disbursement and this would show accountability on their part.

Babatunde Hunpe, Member, Lagos State House of Assembly House Committee on Maritime, while appreciating NIMASA for the gesture, asked for more from the agency.

According to him, Lagos is a coastal area and NIMASA’s work is centered on the coast and so they should consider Lagos in everything that they do.

“We need more than this, but let me first thank you for this so that we will get more in future when we come for it, ” Hunpe said.