Minister reads riot act to NIMASA, NPA, others over spending of generated revenue 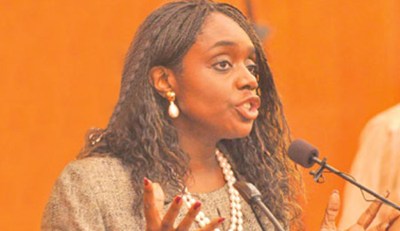 The Minister of Finance, Kemi Adeosun, has issued a circular on guidelines regarding budgeting, revenue and expenditure aimed at ensuring that MDAs remit revenue and generate operating surpluses, which by law ought to be credited to the Consolidated Revenue Fund.
The circular is aimed at compelling Boards and Agencies, which currently operate outside of budgetary control, to comply with the law.
Section 22(2) of the Fiscal Responsibility Act lists agencies including the NPA, NIMASA, NAFDAC, JAMB, NTA, NCC, CAC, NECO, as those which should remit 80 per cent of their operating surplus into the Consolidated Revenue Fund.
Adeosun stated that records show very poor compliance with the provisions of the Fiscal Responsibility Act.
Some agencies have never credited the Consolidated Revenue Fund despite having salary, capital and overhead financed by the Federal Government.
Indeed, cost to income rates of 99.8 per cent have been the average, meaning that they spend all their internally generated revenue and subventions released to them.
The Minister said such practices are not sustainable in any economic climate and with the current serious economic challenges being faced by Nigeria, can no longer be tolerated.
Accordingly, all revenue generating agencies must comply with the circular and cut their costs, Adeosun has said.
In the circular sent to MDAs, the Minister said revenues generated by all Ministries, Departments and Agencies must be reported on a gross basis prior to any deductions.
Also, all self-funded Federal Agencies are to limit their annual expenditures from their internally generated revenues to not more than 75 per cent of their total gross revenue, while fully funded agencies are to remit all their internally generated revenue to the Consolidated Revenue Fund.
The Circular said henceforth, 80 per cent of the resulting operating surplus by MDAs should be remitted into the Consolidated Revenue Fund on a quarterly basis in accordance with the Fiscal Responsibility Act.
To ensure continual monitoring, the circular required all MDAs funded through the annual budget must submit monthly Expenditure Transcripts and Revenue Returns to the Office of the Accountant-General of the Federation, while agencies not funded through the annual Federal Government budget are to prepare and submit Quarterly Management Accounts, including Revenue Returns to the OAGF.
Adeosun reminded all MDAs that in line with Financial Regulations 107, the Accountant-General of the Federation shall carry out routine revenue monitoring and inspection visits to the MDAs to verify compliance with the new guidelines.
The circular said any Accounting Officer/Chief Executive Officer of MDAs that defaults in remitting revenues as appropriate and as when due shall be sanctioned accordingly and the renewal of the tenure of appointment of Accounting Officers/Chief Executive Officers shall be tied to their compliance with the content the new guidelines.