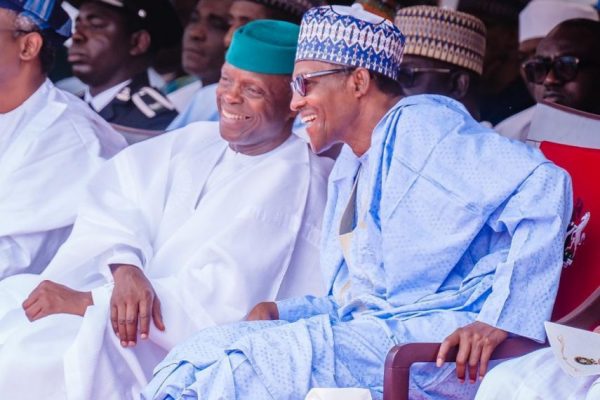 President Muhammadu Buhari has bagged the Nation Builder Award at an event organised by the All Progressives Congress, United Kingdom chapter to celebrate Nigeria’s 61st Independence Anniversary in London.

Jacob Ogunseye, the chapter’s Publicity Secretary, said this in a statement he issued on Sunday on the awards.

Ogunseye said the National Leader of the APC, Asiwaju Bola Ahmed Tinubu, was also nominated for the Leadership Award at the event held on October 2 at Dorchester Hotel, London, UK.

It said Vivian Osadebay-Ndah and Lady Edith Nwachukwu also received the Extraordinary Service Award, while the winners of the Dedication and Service Award were Kikelomo Oyebiyi-Oladapo and Udeme Ukpe.

The award was received on behalf of the President by the Nigeria High Commissioner to the United Kingdom, Ambassador Sarafadeen Tunji Isola.

The award for Tinubu was received on his behalf by Alhaji Bello Abubakar, former Managing Director/CEO, Gamji Bank, Nigeria.

The statement said Ade Omole, Leader of the chapter, while addressing members of the party at the event, called for peace and unity in Nigeria.

He said despite the country’s present challenges, her future looked convincingly bright, adding that Independence Day should be seen as a day for reflection on the country’s past work on the present and plan for the future.

“It is a time to rework, re-jig, revamp and re-engineer the country for economic eldorado and structural workability to guarantee good living standards for the entire citizenry,” the statement quoted Omole as saying.

Omole said the APC UK under his leadership would continue to do everything within its capacity to assist the APC, Federal Government and the country at large to ensure real development.

This, he stressed, was what all APC members, executive and non-executive had signed on to, adding that the Independence Day celebration should be seen as beyond partying and dancing, but a time for sober reflection.

He commended the Nigerian Armed Forces for keeping the country together as one despite several security breaches and for the relative internal peace.

The APC UK leader noted: “We may not be where we ought to be as a country, but we are not where we used to be.

“We have left the sorry and perilous state we were and are now making considerable progress with a new re-invigorated and re-energised military force.

“A time was in this country that the entire nation was under siege and had over 27 of her local governments under the control of terrorists, but today, the story is entirely different.

“All thanks to the President Buhari-led administration, and many accolades to our gallant military officers who have continued to put their lives in the line of danger for us all to live.”

Omole reiterated that as the country moved towards the 2023 general election, the APC was poised to retain power, not by do-or-die politicking, but with the overt milestones it had recorded in the last six years under Buhari.

He assured that more development milestones would be achieved before the end of the administration’s tenure, adding that 2022 would be a year for commissioning loads of projects.

He said more infrastructural strides of the APC government would be unveiled, adding that the several projects the Buhari-led administration would be inaugurating come 2022, can only guarantee economic growth.

“These and many other successes such as the anti-corruption war and improved security architecture are Key Performance Indicators (KPIs) that would make Nigerians repose their faith in the party,” he said.

Omole, however, stressed that to achieve the great country we desired, “we need to solidify our strength, increase our commitment and encourage ourselves to do that which was proper even when no one was watching”.

Omole added that there was, therefore, a need for Nigerians to collectively resolve to continue the journey beyond the country’s 61st independence on the understanding that “we are greater together as a nation than being smaller units of nationalities”.

He noted that nations world over which had not gone through half of what Nigeria had witnessed in recent years had either fragmented or ceased to exist as one.

He expressed optimism that as a country, “we shall overcome our challenges by God’s grace”, saying all that was needed was patience, commitment and support for the APC-led Federal Government.

He appealed to Nigerians to be good ambassadors of their country in their private and public engagements wherever they find themselves and to embrace peace, oneness, unity of purpose and brotherhood.

He said they should also avoid ethno-religious acrimony and work towards supporting government initiatives at all levels.

Omole said: “We have nowhere else to call home and therefore, support for our country should be of utmost priority to us all. It pays no one if Nigeria is up in flames or engaged in avoidable warfare.

“Everyone outside the country has got one family member or the other back home; therefore, we should continue to support and wish Nigeria well,” Omole said.

He also appreciated the entire APC UK executives and the party’s members for their patriotism, support and loyalty to the country and their unity of purpose and tenacity despite challenges.

He noted that the APC-led Federal Government and the UK chapter of the party had done creditably well despite the ravaging COVID-19 pandemic and its devastating effect on the global economy.

He prayed for the leadership of the country under Buhari, saying that God is indeed merciful to Nigeria by the victory of the APC in 2015.

According to him, the emergence of Buhari and Prof. Yemi Osinbajo as Vice President was a big turnaround for the country.

He said: “The duo can best be described as the knights in shining armours of this era sent by God to deliver Nigeria and Nigerians from the shackles of her economic predators, locusts and hyenas.

“I am very sure that as the Buhari-led administration winds down, the leadership will double its efforts at ensuring that it finishes strong by overcoming the seemingly intractable security challenges.”

Omole said the administration would also address the country’s economic challenges by bringing more Nigerians out of poverty to prosperity and abundance at the end of its tenure.