How University of London laid foundation for my greatness — Afe Babalola 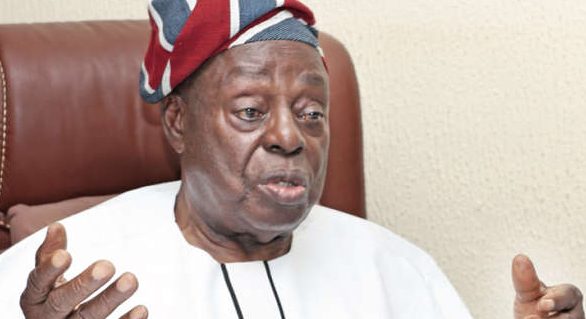 Chief Afe Babalola (SAN), a legal luminary and President of Afe Babalola University, Ado Ekiti (ABUAD), on Thursday gave insight into how the University of London, his alma mater, laid the foundation for his greatness in life.

The nonagenarian revealed this in Ado Ekiti while receiving the British Deputy High Commissioner in Nigeria, Ben-Llewellyn Jones, who was on official visit to the institution.

Babalola who traced the success of his early life to Britain, narrated that, “I was once a farm boy, with no intention of going to school.”

He said, “It was a British missionary who came to visit my father that persuaded him to send me to school.

“I owe everything I became after primary six to the University of London.

“I grew up on the farm. I love farming. I thought it was the best ever. My ambition when I was growing up was to work for my father.

“And later, I inherited part of his farmland and implements, but nature has something better in stock for me through the British.

“The University of London which I was to later attend at that time established an External Degree Programme throughout the British Empire.

Babalola also recalled how the University of London in 2015 gave him the LL.D Honour, as one of the frontline beneficiaries of its External Degree Programme.

“From the above, my university, ABUAD is indirectly a product of what the University of London stands for.

“In fact, the University of London once referred to ABUAD as one of the reasons it awarded the LL.D to me.

“So, it can be inferred that ABUAD is an extension of the University of London,” he said.

According to him, the ranking was done among 99 private universities and 10 out of 197 public universities in the country.

He asked the British Government to be closer and interested in ABUAD’s affairs, more than the United States Government had reportedly done in recent years.

“When the US Consul-General, Jeffery Hawkins visited ABUAD when the institution was barely three years old.

“He recommended the university to the American Government to grant it the automatic right to participate in the Fulbright Exchange Programme.

“This was even when the practice was for universities to first apply and keenly contest for the programme.

“Also, recently on June 24, Dr Gerald Smith, the Regional Counselor for Agricultural Affairs, US Department, was in ABUAD.

“At the end of his visit, said he would be going back home to America as an ABUAD Ambassador,” Babalola said.

Babalola thanked the envoy for the visit, saying that partnering with the British Government would further enhance the development of the institution.

Jones said he was impressed by what he saw at the University, as well as the catalogue of accomplishments recorded by the institution within it’s 12 years of establishment.

the envoy said, “one particular area where students of the institution could benefit was facilitating scholarships, which comes with many packages.

“This would be for those who had completed their degree programmes and are willing to further their education in U.K universities.”

Jones said the non-academic staff of ABUAD would benefit from many available opportunities that abound in British institutions.

He commended Babalola for his initiative in establishing the university and for investing so much to make it a unique institution in Nigeria.

“I have visited 26 States in Nigeria in the past, but yet to visit Ekiti.

“However, my visit to Afe Babalola University, today has given me a good impression about the state and the university, going by what I saw and the accomplishments recorded,” he said.

Earlier in a welcome address, Prof. Smaranda Olarinde, the ABUAD Acting Vice-Chancellor, lauded the achievements of the envoy in Nigeria.

She said countless of uncommon innovations, discipline and character introduced to the university by the founder had in the past attracted many world leaders to pay similar visits.