Douye Diri: The People’s Governor at 62, by Kolawole Oredipe 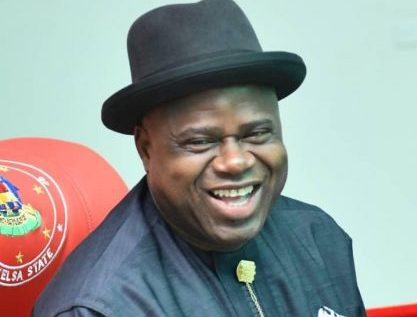 It’s yet another great day in the life of Senator Douye Diri, Governor of Bayelsa State. A day when the man of destiny came into this world.

Born into the family of a Primary School teacher, Pa Abraham and late Mrs. Rose Diri of Sampou community in the present day Kolokuma/Opokuma Local Government Area of Bayelsa State on June 4, 1959. Like the common parlance, “many things have happened and many waters have gone under the bridge” but this man is standing firm and strong by the grace of God in good health on the occasion of his birth.

Douye Diri, is from a humble and very disciplined home. He was not known for celebrating lavish birthdays as a young man. Nothing has changed about his perspective and personal values about birthday celebration, even as a Governor. One other thing he has been consistent with on the auspicious occasion of his birth is to return praises  to the Almighty God with a humble heart for the gift of life.

In addition to appreciating God for the grace, Diri has always said that his birthdays were a period for self-appraisal and evaluation of his contributions to humanity as well as the great impacts such have on the lives of the people. This is the with the intent of providing better services to the people.

He has resisted the temptation of his highly exalted political position to cause a reversal of his longstanding principles and he has remained very humbled by the divine touch in his political trajectory. Yes, birthday represents a new beginning to a brighter life.

The journey to limelight for Douye Diri was not all rosy as it was a product of sheer determination and personal sacrifices. He was unknowingly on a divine journey to fulfilling a destiny as anchored in the God’s promise to Abraham in Genesis 12:2: “And I will make of you a great nation, and I will bless you and make your name great, so that you will be a blessing.” That is the story of Douye Diri, who was not born with a silver spoon.

No doubt, he had a good upbringing by every standard as the son of a teacher, but he took a long walk and very hard decision to change the course of his family history to a more enviable glory.

Douye braced the odds; he was never satisfied with his status as a secondary school teacher because he was confident that a greater future lay ahead of him.

Decision, they say, is the spark that ignites action. Until a decision is made, nothing will likely happen. Douye dared the consequences and took responsibility for all his actions. It was former UK Prime Minister, Winston Churchill that said: “The price of greatness is responsibility.”

Douye, never shy away from taking hard decisions of undertaking huge responsibilities. He made a life changing decision when he voluntarily resigned his job as a secondary school teacher.

Everybody around him was stunned by such a decision. He paid dearly for it because it reflected in his economic life for some time. The turn of event never discouraged him. He was rather emboldened to soldier on. This is a rare  display   of the traits of confidence and strength of  a man who desires greatness with deep convictions for a better tomorrow.

He took his time to take that life changing decision with no regrets. That is leadership! And it is that deep rooted conviction that he has become handy in the administration of the state.  The ongoing urban renewal in Yenagoa city is a point in case under his watch as the 5th Civilian Governor of Bayelsa State. A Yenagoa resident simply identified as Johnny summed up the scenario thus: ” This governor has shown the political will to take that action. No governor in the history of Bayelsa state had done this. The governor is even completing inherited projects from the previous administration. He clearly understands governance and administration. Let’s acknowledge the effort of this governor.”

In just one year in office, there have been loads of achievements from sector to sector for the Prosperity Government. This is clearly a government of impacts. The peaceful and simple lifestyle of the governor is rubbing off on his administration. He is more focused on activities that will engender peace, stability and development of the state. Douye Diri, has shown this from his inaugural address on February 14, 2020. He has won the heart of Bayelsans with this humane disposition. In the area of projects, while a few have been completed many are ongoing at different locations.

In the Bayelsa East Senatorial District, while the Imiringi bridge has been commissioned, the reconstruction of collapsed Elebele bridge is ongoing. Also, work is ongoing on the Nembe unity bridge.

In Bayelsa Central, the Yenagoa-Oporoma road that is linking many riverine communities in Southern Ijaw Local Government Area is top priority of this government and the contractor is measuring up as they are currently working on the bridge to cross the river at Aguobiri village.

A lot is happening within the State Capital of Yenagoa under this government. Two strategic roads that will open up Yenagoa are progressing well – the Glory Drive from Ecumenical Centre and the Igbogene-AIT Outer ring road. The urban renewal in the capital city has transformed the popular Edepie- Etegwe roundabout. Many internal roads were rehabilitated while contracts have been awarded to build twenty new ones.

In Kolokuma/Opokuma, the Kaiama Referral Hospital has been completed while Igbedi road is under construction.

A governor full of energy is making a revolution in agriculture and investing massively in education among others.

He is indeed living a life of passion for service as God continues to renew his strength. For a fact, Douye Diri, is certainly not looking 62 years old because of his mental and physical fitness. He has consistently been engaged in refreshing activities that renew and relax his nerves, muscles and bones for many years through physical exercise, dancing and praising God. In fact, he revels in the common saying that age after all, is just a number.

Popular Grenadian-born Caribbean and a very successful calypso singer, Mighty Sparrow, espoused further about age in the lyrics of his famous song thus: “Age is just a number, controlled by your state of mind.” Sparrow’s message in the song are wishes of greater years ahead for anyone marking a birthday and it thus applied to Gov. Diri, who is marking a birthday for the second time as a sitting governor. For Douye Diri, “after the 61st birthday, the 62nd birthday is expected to be more enjoyable.”

Ultimately, great laughter, smiles, keeping an open mind and an active social life is just the tonic he adopted for healthy living.

Happy birthday to a man of faith and grace; a man whose miraculous emergence was met with great preparedness as a thorough-bred administrator.

This is a governor promoting love, unity and reconciliation; a governor with a touch of excellence who is making great impacts to building a new Bayelsa State.

Happy birthday in sound health and God’s glory to the people’s Governor.