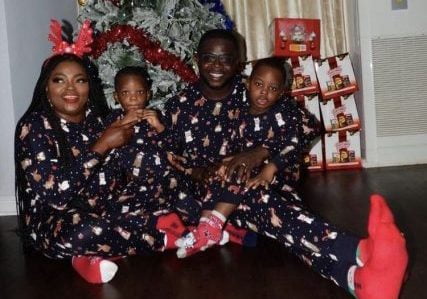 Mella, one of the baby mamas of Abdulrasheed Bello, the husband of Nollywood actress, Funke Akindele-Bello, has unveiled the faces of their twins, warning them not to come for her son, Beni, again.

Recall that The Eagle Online reported that Bello, also known as JJC Skillz, and Akindele-Bello are having marital crisis.

Beni claimed he lived with Akindele-Bello for two years and the house was a horror site, adding that she was “not what you all think she is”.

Shortly after this, JJC Skillz, who is currently in the United Kingdom, took to Instagram to share a photo of him, Akindele-Bello and their twin sons.

He stated that he would be coming home soon to his wife and also told her not to let anyone spoil her vibes.

Akindele-Bello was also in the comment section of the post, telling Bello how much she and her kids miss him.

Mella, who has now reacted to this, has issued a stern warning to the couple.

She also unveiled the faces of the Akindele twins in her Instagram post, which came with the caption: “If you don’t want me to expose your family then don’t expose mine. Funke and Abdul Bello.”

This is coming weeks after Funke said she was hiding her children’s faces because it will only be right if she saves the children from all the attention that fame brings.

She also said she wants them to have their lives and enjoy it.