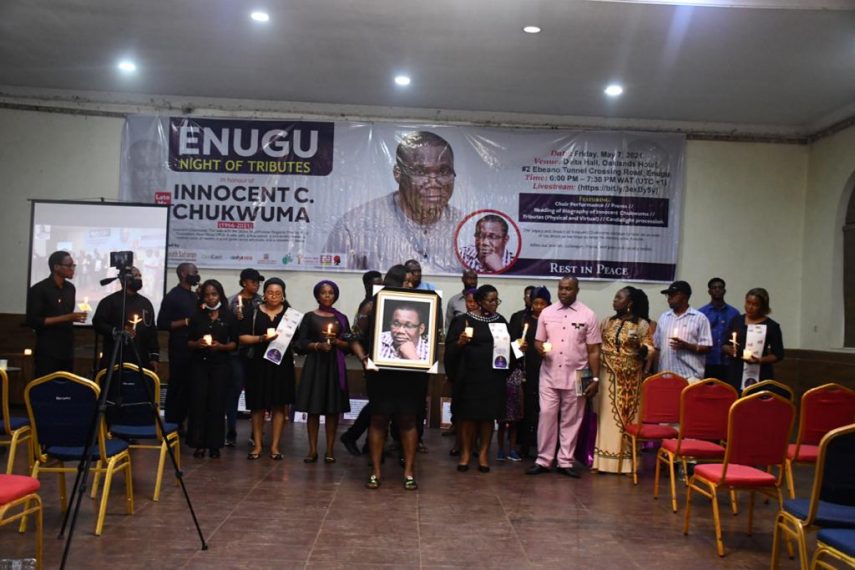 Some Civil Society Organisations and friends of Innocent Chukwuma in Enugu State held a Night of Tributes in honour of their friend and colleague, Innocent Chukwuma, who passed away on April 3, 2021 in Lagos.

The night of tributes was part of a national funeral programme for the civil society leader, a dedicated, thoughtful and admired leader.

Until January 2021, he was the West Africa representative of the Ford Foundation.

He supported and built solid partnerships with donors, civil society leaders and public and private sector leaders across Nigeria and West Africa.

He was also an inspirateur of the Centre for Memories (Ncheta Ndigbo) and many other organisations.

The night of tributes featured solo and choir renditions by different individuals and choral groups who serenaded the guests with many hymns and special number songs.

The biography of Chukwuma was read by Ifeoma Nnamani, a staff of the Centre for Memories, while Dr. Uju Agomoh, Executive Director, Prisoners’ Rehabilitation and Welfare Action, rendered poems dedicated to the deceased and his family.

The event was also an opportunity for many friends of the late human rights activist to express their thoughts on his life as the event featured a lot of tributes.

“I was particularly impressed by his intellect, his enormous kindness and above all his wit.

“And the more I got to know him, the more impressed I became.”

In the same vein, former President of the Nigerian Bar Association, Dr. Olisa Agbakoba, who made a tribute video, described the late Chukwuma as “a very smart and hardworking guy”, even as many tribute videos that conveyed the beautiful sentiments and testimonies from different people were also played.

The Executive Director of the Centre for Memories, Uchenna Achunine, also eulogised the deceased, saying he was a man who was very passionate about touching lives positively as is evidenced by the millions of lives he touched while alive.

The event ended with a candlelight procession in his honour.