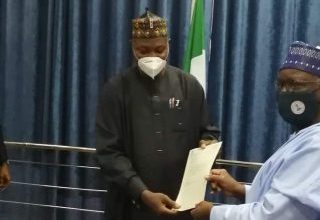 The Governing Council of Bayero University Kano has approved the appointment of Prof. Sagiru Abbas as the new Vice Chancellor of the institution.

A letter of appointment signed by the Pro-Chancellor and Chairman of the Council, Prof. Ibrahim Gambari, was presented to the new vice chancellor on Saturday in Kano.

In the letter, Gambari stated that Abbas would serve as vice chancellor for a term of five years with effect from August 18.

Abbas, a professor in the Faculty of Education, had received the acceptance of the university community during the congregation election held on Wednesday.

The News Agency of Nigeria recalls that at the end of the congregation parley, Abbas received the highest votes of 1,026, followed by Adamu Tanko with 416 votes.

The other contestants: Mohammed Dikko and Dalhatu Balarabe, polled 10 and five votes respectively.

In his response, the new vice chancellor appealed to the university community to give him all the necessary support to move the institution to a higher level.

While giving an assurance to do everything possible in moving the university forward, Abbas pledged to carry everybody along.