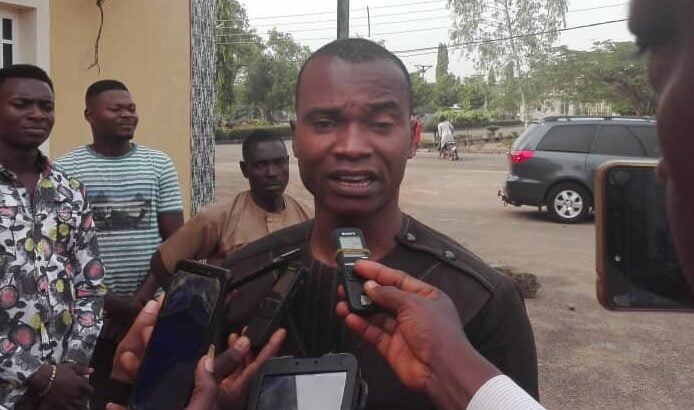 The Ebonyi State House of Assembly has ordered the immediate arrest and prosecution of Ohaukwu Council Chairman, Clement Odah, for allegedly assaulting a lawmaker, Hon. Chinedu Onah.
Onah, the House Committee Chairman on Information, representing Ohaukwu South State Constituency, was said to have been slapped by the embattled chairman for allegedly stepping down the chairman’s nominees for political appointment.
The lawmakers, who convened an emergency plenary on Wednesday, following the incident, also recommended that Odah be subjected to a psychiatric test to determine the state of his mental health.
The House, presided over by the Deputy Speaker, Hon. Obasi Odefa, further directed its ad-hoc committee on Local Government to immediately commence the investigation of the administration of the Council Chairman to ascertain the level of his administrative responsibility and competence.
This House decisions followed a motion of urgent public importance moved by the House Leader, Hon. Victor Chukwu, representing Ezza North East State Constituency.
The lawmakers, who could not hide their anger and disappointment over the action of the Council boss, took turn to condemn the act, describing it as a desecration of the legislative institution.
The Deputy Chief Whip and member representing Ebonyi North East State Constituency, Hon. Benjamin Ezekoma, who was at the budget room when the incident happened, confirmed that the lawmaker was actually slapped by the Council Chairman.
Ezekoma further explained that the action of the Council Chairman infuriated them, leading to the emergency plenary.
Narrating the incident in an interview, Onah said he was assaulted by the Chairman for doing nothing.
According to him, the Council Chairman confronted him while he was performing his legislative duties with other lawmakers, accusing him of stepping down his nominees who came for screening in the House.
He alleged that while making efforts to explain, the Chairman raised his hands and slapped him, calling him “small boy”.
Onah narrated: “He came to our committee room this morning where we were taking some MDAs on budget defence and started shouting that the small boy, which is me, stepped down his nominees as members of Management Committee.
“That he has come to tell me that I must clear them.
“But unfortunately, I didn’t step down his nominees.
“That’s not my Constituency.
“I am not representing Clement Odah.
“I am representing Ohaukwu South State Constituency.
“Besides, I have not stepped anybody down in the course of the screening and I owe him no apologies to have done that because that’s my job to represent my people.
“But unfortunately, I didn’t do that.
“The next thing he did when I asked him: ‘Mr. Chairman you should have asked me whether I did it or not before accusing and abusing me,’ was that he gave me a very huge dirty slap for just just doing nothing.
“One thing is that I didn’t bother to react because I want the law to take its course.
“That’s exactly what happened.”
Meanwhile, Odah, in reaction, denied slapping the lawmaker.
He explained that he only came to the House to make inquiries why four appointees of Governor David Umahi from his Council were not screened and thereafter exchanged pleasantries with his lawmaker friends and left.
Asked whether he was aware of the resolution of the House which ordered his arrest and medical examination to determine his mental status, he doubted the possibility, maintaining that there was nothing to warrant such resolution.
Onah and Odah are both members of the Peoples Democratic Party.