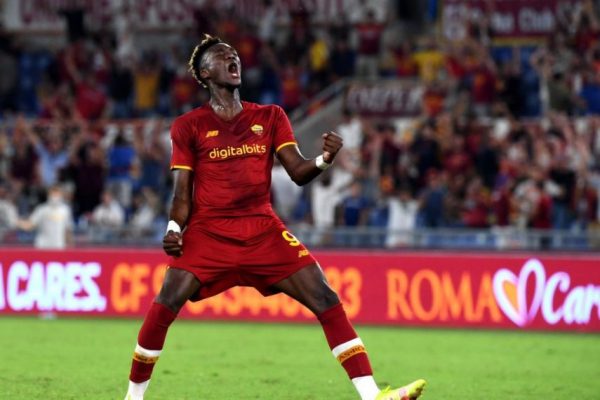 Arsenal are reportedly interested in signing Tammy Abraham again this summer but face paying a huge transfer fee if they are to prise him away from Roma.

The Gunners were interested in signing the England striker last summer before he joined the Serie A giants from Chelsea in a £34million deal.

Mikel Arteta is looking to reinforce his attacking options this summer with Pierre-Emerick Aubameyang having joined Barcelona in January and Alexandre Lacazette and Eddie Nketiah expected to leave on free transfers in the summer.

Football.london therefore claim 24-year-old Abraham is among the shortlisted profiles who could arrive at Emirates Stadium this summer, but that Roma will not accept any fee below £67million (€80m).

That is the same figure Chelsea can reportedly re-sign their former striker back for after a buy-back clause was inserted in his Roma deal when he signed in last summer.

Abraham – a boyhood Arsenal fan – has scored 24 goals in 46 games across all competitions for Jose Mourinho’s side this season, including 15 in 33 in Serie A.

And the former Chelsea forward admitted earlier this month he is open to returning to the Premier League in the future.

He told talkSPORT: ‘When I see reports linking me with other clubs it makes me feel good, it makes you feel like you’re doing something right.

‘It’s a nice feeling seeing your name all over newspapers. But for me, it’s about focusing on doing my business here.

‘I can keep getting linked with many clubs, but who knows what the future holds?

‘Of course, I grew up in England, I’m a London boy. So maybe one day I’ll be back in the Premier League to make noise there.

‘But for me right now it’s about focusing on Rome, on doing the best I can and hopefully winning these guys a trophy, which they haven’t done in many years.’

The Gunners are also keen on Manchester City forward Gabriel Jesus, who netted in Pep Guardiola’s side’s 4-3 win against Real Madrid in their Champions League semi-final first leg on Tuesday.

It is a deal the Gunners believe can be completed, with the 25-year-old Brazilian, who has just a year left on a five-year deal, expected to seek a move.

The Arsenal boss knows all about Jesus’s versatility, work-rate and exemplary attitude from his time as Pep Guardiola’s assistant at City, and preparations for the club’s summer transfer strategy are under way.