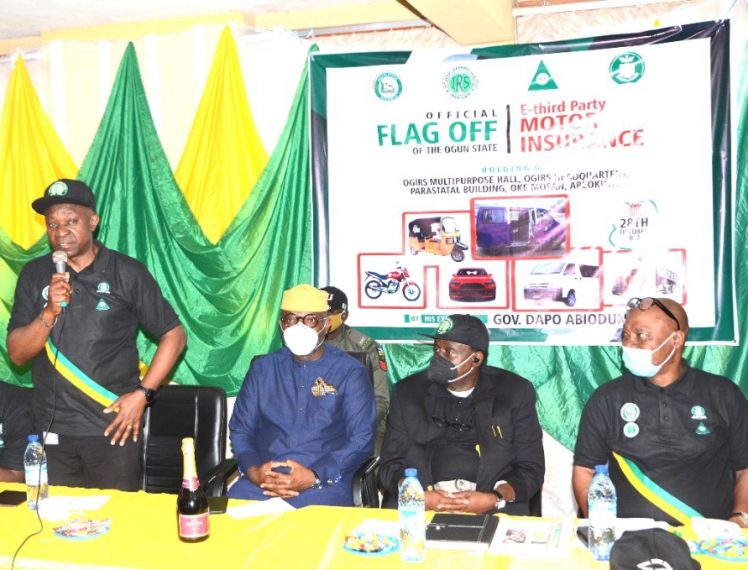 The Ogun State Governor, Dapo Abiodun, says it is imperative to be a key enabler in driving the State economy through adoption of Information and Communication Technology in order to provide prudent service delivery for the people.

He stated this at the official flag off and launch of the e-Third party motor insurance scheme in Abeokuta, Ogun State.

Abiodun was represented by the Chief Economic Adviser and Commissioner for Finance, Dapo Okubadejo, at the event held at the Ogun State Internal Revenue Service, Multipurpose Hall, Abeokuta.

He added that economic prosperity of the residents of the State was largely depended on the contributions of residents, urging major stakeholders to key into the scheme for their benefits.

He warned the prospective applicants of the new motor insurance not to patronise touts under the new arrangements, noting that whosever uses the touts would be detected and prosecuted so as to serve as deterrent to others.

Olaleye said it brings about sanity to the State and the welfare of motorists in case of any accident, imploring motorists, cyclists and other stakeholders to key into the programme for their benefits so as to make the insurance company pay for third party that might involved in an accidents.

He said: “Indeed, there is no need to allay any fear if you involved in any accident, all what you need, is to call the number on your insurance papers, and they will come your rescue, it is the insurance company that will pay the third party.”

The State Coordinator, Ogun e-Third Party Insurance Scheme, Akinyoola Moses Afolabi, said the National Insurance Commission, which supervised the recapitalisation process for the industry, including Nigerian Insurers Association, had come together with the Nigeria Insurance Industry Platform to regularise the scheme.

Afolabi also said the Nigeria Insurance Industry Database, with the National Assembly has equally came up with several interventions to help in deepening the market, improved product quality and banish/reduce incidence of fake papers in the industry.

He then allayed fear of post flag-off challenges, which might forced the people to issue fake document or resolved in bribery scandal, but he emphasised that with the resolve of all practitioners and continued support from the State Government, all stakeholders would surely overcome the bottlenecks.

In her goodwill message, the General Manager/Group Head Business Development, Great Nigeria Insurance, Adeyinka Olumayowa, said the essence of third party motor insurance was to take of the damaged caused by the insured to the third party’s property or vehicle.

Olamayowa added that it also settles the third party’s medical expenses (if any) in the event of an accident, when the policy holders is also at fault, noting that the e-Third party motor insurance policy could be purchased at all licensing offices and internal revenue service offices across the State.