2014 World Cup: Ghana versus Germany will be game to behold 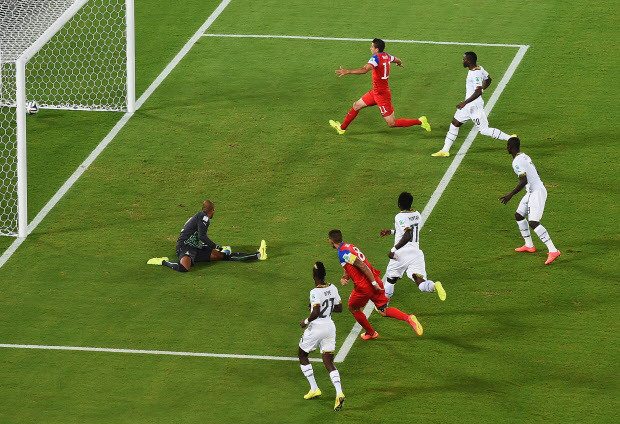 Ghana’s Black Stars take on Germany on Saturday at the Arena Amazonia in Manaus at the FIFA World Cup Brazil 2014, in a game to behold.
It is a game in which both sides will be seeking the maximum points to guarantee them a spot in the knockout round of the competition.
But Ghana will be more hard-pressed for a result, having lost 1-2 to the US in their first Group G game at Estadio das Dunas in Natal on June 16.
Germany have already stamped their authority on the group with a dominating 4-0 demolition of Portugal.
That result had made the Germans overwhelming favourites to finish top of Group G, confirming what was the dominant view in many pre-competition previews.
But they cannot afford to be complacent against the Ghanaians who were the best African side at the 2010 World Cup in South Africa.
The Black Stars went all the way to the quarter-finals and would have made it to the semi-finals but for a penalty miss by Asamoah Gyan against Uruguay, which proved very costly in the end.
The Germans are hoping to win a fourth FIFA World Cup title, having won it in 1954, 1974 and 1990.
They finished third at the last edition in 2010, and have now started brightly.
Germany and Ghana have only ever played each other twice on the international stage, with the former emerging triumphant on both occasions.
Their first meeting, a friendly back in 1993, was played in the German city of Bochum and finished with the home side winning 6-1.
The second was a much tighter affair, with the Germans grinding out a 1-0 win at the 2010 FIFA World Cup in South Africa during the group stages.
Germany is a near-consensus pick to advance all the way to the semi-finals and more performances like the one against Portugal will definitely get them there.
In spite of going down 1-2 to the US, Ghana were arguably the better team throughout 90 minutes, controlling possession and creating multiple scoring chances.
With the speed and relative lack of guile of their attackers, Ghana are much more suited to the counter-attacking game as opposed to keeping possession and breaking down opponents’ defence.
In spite of conceding within half a minute against the US, the Black Stars have quite a solid defence, as they conceded just six goals in eight African qualifying games.
To Ghana’s advantage, both of Germany’s full-backs are really centre-backs playing out of position and do not possess sufficient speed.
If either of Ghana’s speedy wingers manages to get them isolated, the African side can create some decent goalscoring opportunities.
Gyan and their other forwards were guilty of wasting some very good chances against the US.
But with the likelihood of those chances harder to come by against Germany, expect the Ghanaians to try to make them count this time.
Germany’s Thomas Muller, who loves playing on the big stage of the World Cup, would indeed be a major factor with his spectacular hat-trick, which powered Germany’s 4-0 win over Portugal.
Muller’s explosion has quickly silenced the doubts that Germany’s line-up, which lacks a recognised centre-forward, also lacks goals.
The German forwards, namely Muller, Mario Goetze and Mesut Ozil, are all incredibly intelligent and are versatile footballers capable of finding holes in opponents’ defences.
A win against Ghana would not guarantee Germany their spot in the knock-out stages.
However, if the US beat Portugal the following day, then the Germans can go into their final group game against the Americans with much confidence.
This will be with the knowledge that their spot in the Round of 16 has already been guaranteed.
Surely, it is going to be a match to behold at the Arena Amazonia Manaus stadium in Brazil.

Rashford strikes as Man U outclass Forest in first leg