Report of Electoral amendment not signed by majority members – 59 Senators 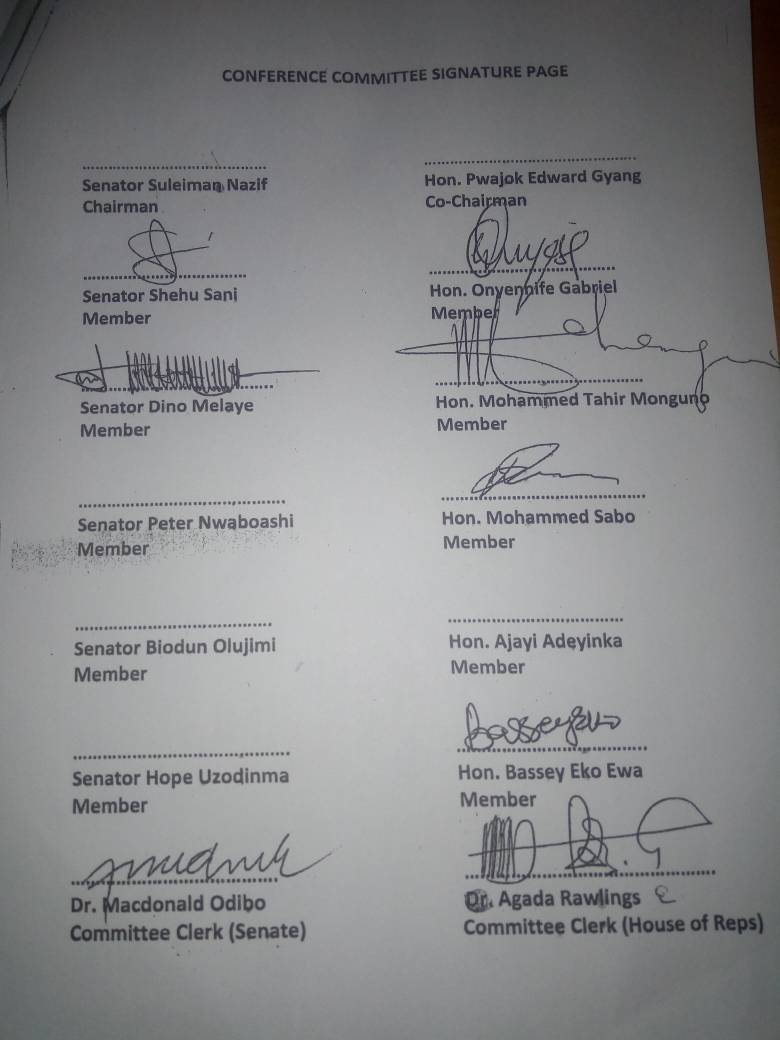 Not less than 59 Senators elected on the platform of the All Progressives Congress on Wednesday revealed that the report of Conference Committee on the Amendment of the Electoral Law was not signed by the majority of members of the Panel.
Although 10 of them addressed newsmen on the issue, the insisted they are not less than 59 lawmakers that are against the report, which they alleged was huridely passed by some senators loyal to the President of the Senate, Dr. Abubakar Bukola Saraki, in connivance with senators elected on the platform of the Peoples Democratic Party.
The report distributed on the floor, which was obtained by our correspondent, showed that six signed it out of 12 members of the Conference Committee.
Those that signed the report were Senator Shehu Sani, Senator Dino Melaye, Hon. Mohammed Sabo, Hon. Mohammed Mung, Hon. Gabriel Onyennife and Hon. Bassey Ewa.
Lawmakers that were yet to sign the report were the Chairman of the committee, Senator Nazif Suleiman, Senator Peter Nwabochi, Senator Hope Uzodinma, Senator Biodun Olujimi, Hon. Ajayi Adeyinka and Hon. Pwajok Gyang.
Speaking on behalf of the aggrieved senators, Senator Abdulahi Adamu said the process was rushed to achieve ulterior motives.
Adamu said: “We are part of the whole body of senators who oppose the process by which the so-called conference report was laid and considered as rushed.
“I had the opportunity (to speak), I was heard, but the Senate President said my observation was being noted.
“The reliance upon the relevant statutes, some of which have actually not been signed to the best of our knowledge, and we did challenge that anybody who has the signed copy should produce it there so as to check doubting Thomases.
“We believe the process was rushed.
“There is no need for the rush.
“Give everybody the opportunity.
“There is no reason for just two people to speak on the issue.
“It’s not the tradition of the senate.”
Adamu alleged that the process was pre-determined as even the Chairman of the Senate Committee on the Independent National Electoral Commission did not sign the report.
He said: “We are against what has happened.
“We are not the only ones.
“If you take note of the report that was circulated, the chairman and co-chair did not sign.
“We don’t know why they didn’t sign.
“Why do we want to make a law that addresses one particular issue targeted at a person.
“This is very partisan.
“You could see from the body language, from the utterances that it is a pre-determined thing by a political party that is threatened by the APC government.
“Whatever incumbency given to anyone we are denying that one.
“We are not part of this endorsement.”
In his own contribution, Ovie Omo-Agege, who called for division on the floor when the bill was passed, but ignored by Saraki, said the bill would not have been passed if the presiding officer had allowed a division.
Omo-Agege also alleged that the House of Representatives did not form a quorum when the issue was considered.
He said: “For some of you who are familiar with what transpired in the House of Reps, only 36 members were on the floor when this so-called amendment to section 25 of the Electoral Act was introduced.
“The position we took is that 36 people cannot determine the destiny of 360 people in the House, which is now being carried over to 109 in the Senate.
“The least we are owed is for this so-called amendment to be deliberated upon and our rule is clear.
“We have 59 senators who are opposed to the inclusion of section 25 of the Electoral Act.
“If that division was allowed today, 59 senators would have voted to delete that purported amendment to section 25.”
But the Senate spokesman, Senator Abdullahi Sabi, who addressed journalists immediately after the aggrieved senators left the Senate Press Centre, rejected the accusations of partisanship and personal interests leveled against the Saraki leadership.
The Senate spokesman denied allegations by his aggrieved colleagues that there was no quorum before the conference committee report was adopted at Wednesday’s plenary.