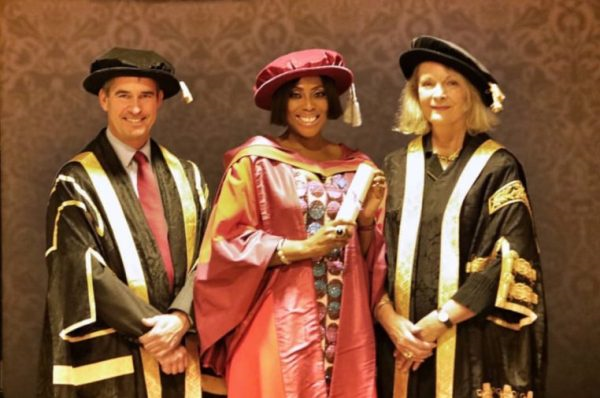 Media mogul, Mo Abudu, has become the first African to be honoured with the MIPTVMédailles d’Honneur.
News Agency of Nigeria reports that the Ebony Life boss was awarded in Cannes, France, at the InterContinental Carlton Hotel on Monday.
The prestigious MIPTV Médailles d’Honneur are awarded to senior executives who have, through their talent, leadership and passion, made a significant contribution to the world of television and the development of the international TV community.
Abudu received the award alongside Ilene Chaiken, Writer, Showrunner and Producer (USA); Stéphane Courbit, Chairman, Banijay Group (France); and Jane Millichip, Managing Director, Sky Vision (United Kingdom).
She took to her Instagram page on Tuesday to excitedly share the news. She wrote, @moabudu, “Basking in the glory of receiving my award. I share this award with the EbonyLife Team.
She stated: “I thank all our partners, sponsors, my family, my dearest mother, my darling Temidee and Koko and of course my bestos that have helped and supported us on our journey. Much love always.
“Sharing the stage with three other incredible people honoured with this award tonight – US writer, showrunner and producer, Ilene Chaiken.
“Chairperson of the Banijay Group in France, Stéphane Courbit, and UK managing director of Sky Vision, Jane Millichip.
“Camille Bidermann, Executive Director of the International Academy of Television Arts and Sciences, presented me with my award last night. Thank you so much Camille for your words of inspiration.
“A major part of my acceptance speech was dedicated to the creative business leaders in the room and the need for a partnership between our respective continents.
“So that our stories can be told with authenticity and produced to the best international standards.
“If these stories are told from both our perspectives there is a captive audience on both sides of the Atlantic waiting to be entertained as never before and with creative business leaders adding significantly to their bottom line!”
Abudu has been described by Forbes as “Africa’s Most Successful Woman”. She launched Nigerian broadcaster and producer EbonyLife TV in 2013, producing over 1,000 hours of original programming each year.
She went into filmmaking with the creation of EbonyLife Films. She is the Executive Producer of ‘Fifty’, ‘The Wedding Party’ (2016), the most successful Nollywood film ever at the Nigerian box office.
She also produced ‘The Wedding Party 2: Destination Dubai’ (2017), the highest grossing Nollywood film of all time; and ‘Chief Daddy’ (2018), the third-highest grossing Nigerian film.
In March 2018, Sony Pictures Television announced a three project deal with EbonyLifeTV, the first of its kind between SPT and a Nigerian television company.