Lagos to LASTMA, VIO, others: Stop taking bribes from citizens 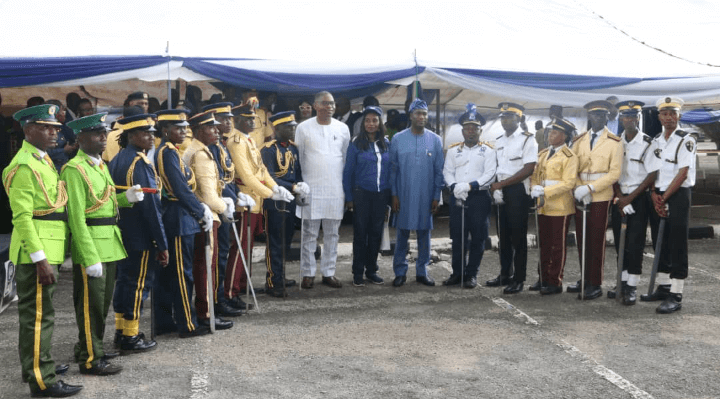 Governor Babajide Sanwo-Olu of Lagos State has charged Law Enforcement Officers to be professional and civilised in their discharge of duties.

Governor Sanwo-Olu gave the charge at the passing out parade of the Law enforcement Officers on Thursday in Lagos.

The passing out parade signified the successful completion of series of training programmes for the 8,316 law enforcement officers of the  Lagos State Traffic Management Authority, Vehicle Inspection Service, Kick Against Indiscipline and Neighbourhood Safety Corps.

The News Agency of Nigeria reports that the parade was held at the Lagos Enforcement Training Institute inside the Lagos State Public Service Staff Development Center, Magodo on Thursday.

The Governor, who was represented by his Deputy, Dr. Obafemi Hamzat, warned against any form of harassment, arbitrariness and extortion from any of its law enforcement officers.

Sanwo-Olu said: “I want to particularly emphasise that while you are expected to be firm in enforcing the law, you must demonstrate professionalism and civility in the way and manner you relate with the people.

“This administration is irrevocably committed to upholding the tenets of the rule of law.

“Therefore,  government will not condone any form of harassment, arbitrariness, extortion from any of its law enforcement officers.”

Sanwo-Olu assured that his administration would continue to strengthen the capacity of the law enforcement officers with the appropriate gadgets and equipment that would enhance their efficiency and effectiveness.

The governor also added that government would continue to promote accountability and transparency.

In his remarks, the State Attorney General/Commissioner for Justice, Moyosore Onigbanjo (SAN), represented by the Director, Advisory Services, Ministry of Justice, Saheed Quadri, advised the law enforcement officers to serve with honour, dignity, courage and integrity.

Onigbanjo said: “As an individual, you must show allegiance to what is right and conform to a standard of conduct that shows your true worth, display bravery and honesty.

“As law enforcement officers, you are expected to have knowledge of the content of the constitution and the laws of the country .

“Also, you are required not only to comply with the law but to also ensure that other persons comply with it as well.”

Delivering her speech, the Chief Executive Officer and Head of LETI, Abiola Adeyinka, said the training of law enforcement officers was important and necessary because it represented a good opportunity and privileges for officers to grow their knowledge base.

Adeyinka said it would also help the officers improve their job skills to become more effective and efficient in the work place.

She noted that the training would ensure excellence in their conduct during the discharge of official responsibilities.

The Head of LETI appealed to the state government for extension of training days in other to capture different areas of development in law enforcement and innovative technologies.