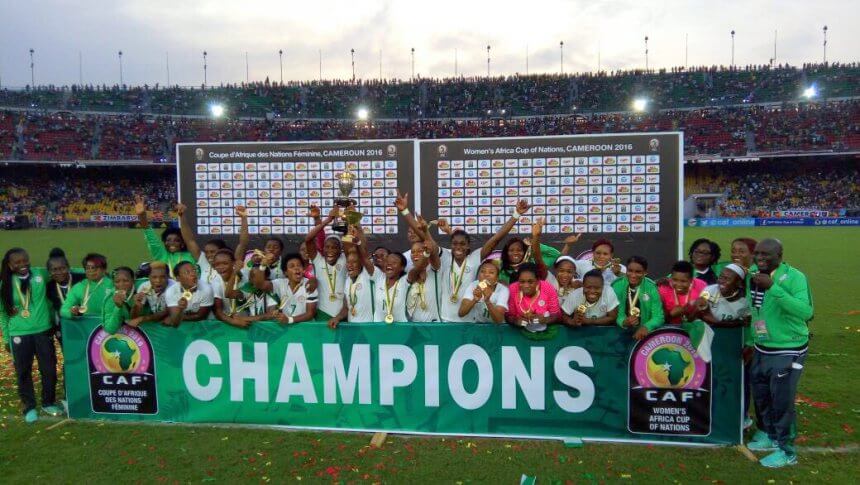 The victorious Super Falcons will protest their unpaid allowances on Wednesday in Abuja.
The aggrieved players, who won the 9th edition of the African Women tournament that took place in Cameroon, refused to exit the team’s hotel following their unpaid entitlements, a continuation of their protest with the refusal to relinquish the trophy.
However, the girls are ready to carry placards and proceed on a peaceful protest to the State House, where the Federal Executive Council meeting will take place, in request of their allowances and bonuses, which is estimated to be $24,000 each, approximately N11.5 million per player.
Leader of the protest, Aderonke Bello, a journalist and advocate, said the girls deserve to be paid their dues and to also get their dues because they have served the Nation diligently.
Bello said in a statement: “This is unfortunately a regular occurrence to female football in Nigeria, we treat our victorious girls with disdain and total disrespect as all the time…disgraceful really. It is inconceivable that the NFF/Federal government are unwilling to pay the players their dues after winning the trophy. This has to stop and the girls must be paid their dues.
“We are going to protest the unfair treatment meted out to these champions who have won the tournament eight times, making them the most successful football team in Nigeria, and we hope the Federal Government will listen to their plea.”
The take off for the protest is Agura Hotel in Abuja at 8am.