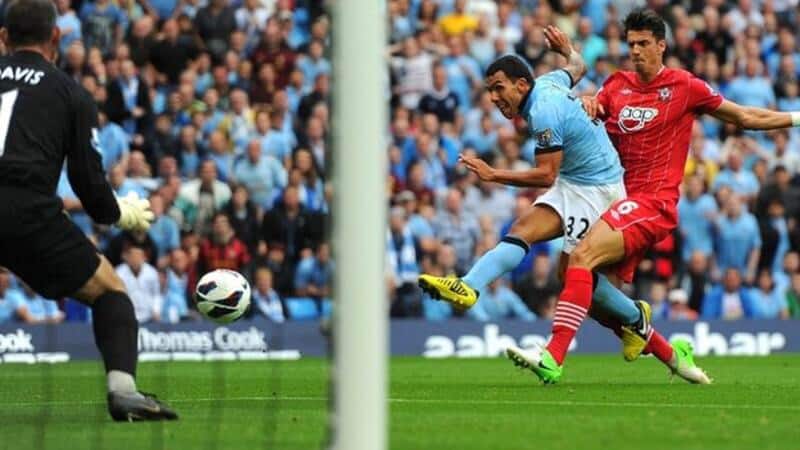 City are now seven points clear of Manchester United in the race for a top-four finish, having played two games more than their rivals – who they are still to face in the final run-in – while Southampton remain ninth in the table.

City were dominating possession but struggling to do too much with the ball, though that should have changed 35 minutes in when David Silva slotted wide after being spotted near the back post by Aguero.

The only real talking point in a bland first half came shortly after that Silva miss, as Leroy Sane got in behind and was sent crashing to the ground by Fraser Forster, only for referee Neil Swarbrick to wrongly wave away his penalty appeals.

City’s urgency was clear to see in the early stages of the second period, testing Forster for the first time two minutes after the restart through a tame Yaya Toure shot from range – a sign of things to come.

The opening goal arrived 55 minutes in thanks to returning skipper Kompany, who climbed higher than Maya Yoshida to head home his first top-flight goal in 20 months.

Jesus Navas had tested Forster in the direct build-up to that key moment in the match, and the Englishman was required once more to keep out Silva’s rebound after parrying Kevin De Bruyne’s initial cross into the area.

Southampton have shown good steel of late, however, losing just one of their last six matches prior to this weekend, and they nearly snatched a leveller when defender Yoshida peeled off at the back post but sent his header straight at Claudio Bravo.

City had their killer second 13 minutes from time, hitting their opponents in a counter-attacking move that culminated in De Bruyne bursting clean through and squaring for Sane to roll the ball home.

Two soon became three following another De Bruyne assist, this time racing to the byline and floating the ball into a dangerous area for Aguero to power home his 11th goal in 11 outings.

All that was left for City to do was see out the opposition in the remainder, which they duly did thanks to the solid defensive work of star performer Kompany.