EPL: Arsenal close gap on Liverpool after comeback at Leicester 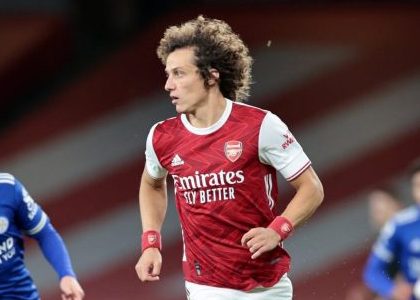 Share
Facebook Twitter LinkedIn Pinterest Email
Arsenal ended a run of two consecutive away Premier League defeats with an impressive 3-1 victory over high-flying Leicester City on Sunday.
Mikel Arteta’s men fought back from an early Youri Tielemans goal to score through David Luiz, Alexandre Lacazette and Nicolas Pepe, ending a three-game losing streak at the King Power Stadium in the top flight.
The result means Arsenal closed to within three points of sixth-place Liverpool, having played a game more, while Leicester stay third and 13 points behind leaders Manchester City.
Tielemans gave Leicester the lead with a precise finish after being allowed to run unchecked into the Arsenal box, with Kieran Tierney out of position and Pablo Mari distracted by Jamie Vardy.
It was the fourth time the Gunners had conceded in the opening six minutes of a league game in 2021, but it seemed to spark them into life, with Pepe winning a penalty only for VAR to determine he was fouled outside the box.
David Luiz deservedly equalised six minutes before the break, steering a fine header past Kasper Schmeichel from Willian’s free-kick, and the visitors were ahead in injury time.
Pepe’s shot was blocked by the raised arm of Wilfred Ndidi and this time VAR ruled in favour of a penalty, allowing Lacazette to smash home from the spot.
Injury problems struck each team either side of the break, with Emile Smith-Rowe limping off for the Gunners before Leicester’s Harvey Barnes was taken off on a stretcher, his left leg in a brace.
Arsenal scored their third soon afterwards, Pepe leading a counter-attack and then tapping a loose ball into the net after good work from Martin Odegaard and Willian.
Pierre-Emerick Aubameyang came off the bench and almost made it 4-1, skipping into space and firing just wide of the right-hand post.
After a surprise Europa League exit to Slavia Prague this week, this was not the way Brendan Rodgers will have wanted Leicester to respond.
The Foxes will hope these defeats do not point to a repeat of 2019-20. They lost on February 28 last year, away to Norwich City, during a six-game winless run that prompted a poor end to their season and a failure to see out a top-four finish.
Next up for Arsenal is a trip to Burnley on Saturday, three days after Leicester face the same opposition at Turf Moor.
Alexandre Lacazette Burnley David Luiz Mikel Arteta Nicolas Pepe Youri Tielemans
Share. Facebook Twitter Pinterest LinkedIn Tumblr Email