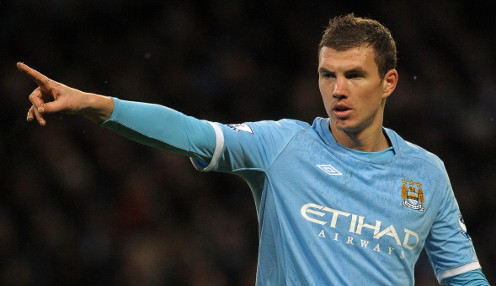 AS Roma striker Edin Dzeko scored with a memorable volleyed goal following a run by debutant Justin Kluivert to give his side a 1-0 win at Torino in their opening Serie A game on Sunday.
New-look Inter Milan, who are harbouring title ambitions and boasted four new signings in their line-up plus Croatia World Cup finalist Marcelo Brozovic, got off on the wrong foot with a shock 1-0 defeat at modest Sassuolo.
Parma, back in the top flight only three years after being declared bankrupt and demoted to the fourth tier, squandered a two-goal lead on their return in a 2-2 draw at home to Udinese.
Dzeko’s remarkable goal in the 89th minute was reminiscent of Marco Van Basten’s famous effort for the Netherlands in the Euro 1988 final.
Roma was rewarded for their persistence after they had hit the woodwork three times.
The battling hosts also struck the post and had a goal disallowed.
The game appeared to be heading for a draw until substitute Kluivert, the son of former Barcelona and Netherlands forward Patrick Kluivert, collected the ball in midfield, slipped past two Torino defenders and forced his way to the byline.
The 19-year-old crossed deep into the area where Dzeko met the ball with the inside of his left foot and sent a deft volley into the far corner of the net from a seemingly impossible angle.
Kluivert was signed from Ajax during the close season.
Aleksandar Kolarov and Dzeko both hit the post during the first half and the Bosnian again struck the woodwork from a free kick in the second half.
Torino midfielder Tomas Rincon also struck the woodwork in the first half with a dipping shot and Iago Falque had a goal disallowed for offside following a VAR review three minutes after the break.
Midfielder Javier Pastore and goalkeeper Robin Olsen also made their debuts for Roma, who were Champions League semi-finalists last year.
Torino coach Walter Mazzarri was sent off for protesting about what he thought should have been a penalty for his side.
Domenico Berardi’s 27th-minute penalty, after new signing Federico Di Francesco was tripped, gave Sassuolo their win over a disappointing Inter, who once again struggled on a visit to the Mapei stadium.
Inter gave debuts to Lautaro Martinez, Stefan de Vrij, Matteo Politano and Kwadwo Asamoah at the start while Keita Balde came on during the second half, but their biggest signing, midfielder Radja Nainggolan, missed the game with a muscular injury.
Sassuolo goalkeeper Andrea Consigli denied Inter a late equaliser with a superb point-blank save from De Vrij’s header, but otherwise was given little to do by a toothless Inter attack.
Roberto Inglese, on loan from Napoli, and Antonio Barilla gave Parma a 2-0 lead over Udinese inside the hour but they were pegged back by a Rodrigo De Paul penalty and a goal from Seko Fofana.
Promoted Empoli began with a 2-0 win at home to Cagliari and SPAL won 1-0 at Bologna, who were playing their first game under former AC Milan coach Filippo Inzaghi.
Reuters/NAN.