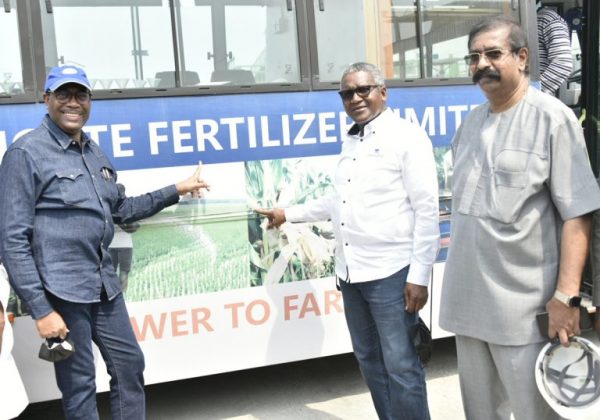 Adesina made the assertion on Sunday in a statement from his tour of the Dangote facilities over the weekend.

He said that the project, which was far beyond the expectations of his team, was the best industrialised project to happen to Africa.

The top banker noted that the projects could address Nigeria’s foreign exchange deficits and save the country about $9 billion yearly from petroleum products imports.

He added that the Chairman, Dangote Group, Aliko Dangote, is an enigma, who should be honoured for his passion, vision and determination to ensure that the continent is out of the poverty circle.

This, Adesina, explained, Dangote had achieved with his aggressive employment generation scheme across most African countries.

“Dangote is quite an inspirational and visionary business leader and for anybody to have done what I have seen here, I think that person deserves world class kudos for that….

“I see a company that I will proudly call Africa’s growth accelerator company.

“With this project, we see an acceleration of how to reduce imports, have an outbound on export, a value chain development and how to compete regionally and globally.

“I am completely blown away with what I saw here today as this project will reverse the huge sum the nation spends on foreign exchange.

“When you look at how much we import, it is about $57 billion worth of different products and we export only about $50.4 billion, so we have to balance that with about $7 billion.

“Talking to them here, they showed us that they can have a domestic market of about $11 billion and that is an incredible market, so this is huge for Nigeria and even for Africa as a continent.”

On the fertiliser complex, Adesina noted that the three million metric tonnes of urea would make Nigeria totally self-sufficient and become net exporter of fertilisers.

“It will drive productivity growth in Nigeria, prices will come down and the quality will also improve,” he said.

Responding, Dangote revealed that the refinery would commence operation by the third quarter of 2022.

“On the mechanical completion, we are almost finished, but we have started hydro testing and we are almost 70 per cent gone, hopefully before the end of Q3, operations will commence,” he said.

He stated that the 650,000 barrels-per-day refinery would stimulate economic development in Nigeria.

Edwin added that the refinery could meet 100 per cent of the Nigerian requirement of all liquid products (gasoline, diesel, kerosene and aviation jet), and also have surplus for export.