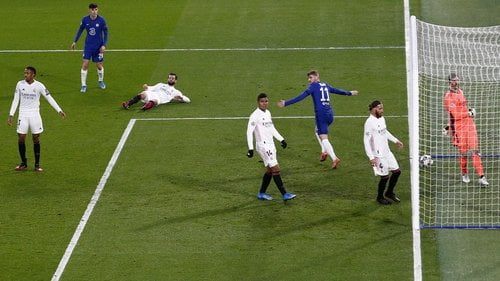 Chelsea sealed their place in an all-English Champions League final against Manchester City after a 2-0 win over Real Madrid at Stamford Bridge sealed a 3-1 aggregate victory.

Having drawn 1-1 in last week’s first leg, Zinedine Zidane’s men had to find the net to keep alive their chances of reaching the decider in Istanbul, but it was the home side who grabbed the only goals of the game via Timo Werner and Mason Mount.

Werner broke the deadlock in the 28th minute, with the Germany international profiting from good work from Kai Havertz and N’Golo Kante.

Kante sent Havertz striding into the box and the former Bayer Leverkusen forward dinked the ball over the onrushing Thibaut Courtois.

The ball rebounded off the crossbar, but as everyone else looked on in surprise, Werner was first to the ball and nodded home.

Werner was rewarded with a goal after earlier seeing a smart finish ruled out for offside, having swept in a low cross from Ben Chilwell.

Chelsea spurned a host of second-half chances to kill off the tie, but at the death Mount finally doubled the home advantage, with the England forward turning home Christian Pulisic’s cross in the 85th minute.

The Blues will now face Man City at the Ataturk Olympic Stadium on May 29.