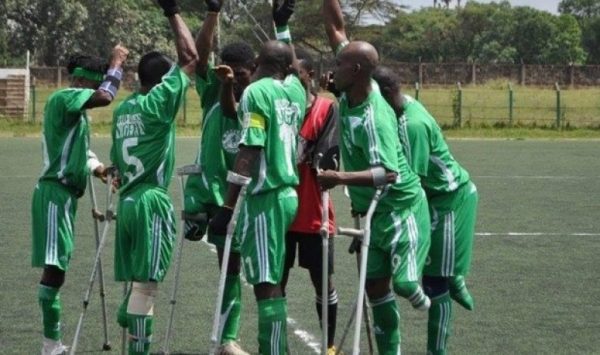 Fred Edoreh, the Fund Raising Coordinator for the national amputee football team known as Special Eagles, on Monday expressed confidence on the likely departure of the first batch of players for the World Cup on Wednesday.
Edoreh told the News Agency of Nigeria in Lagos that financial support from individuals and the Super Eagles of Nigeria had been helpful in fine-tuning the travelling arrangements for the team.
NAN reports that Nigeria will participate in the Amputee World Cup organised by World Amputee Football Federation in Mexico from October 24 to November 5.
He said: “The financial support we got from Amaju Pinnick, president of NFF, Super Eagles and a host of others who prefer to remain anonymous have been very helpful.
“We are looking at Wednesday for a good number of the footballers to depart since the opening ceremony is holding on Thursday so that they can register their presence.’’
He added that the team’s national camping at Teslim Balogun, Stadium, Surulere had gone a long way to get the team concentrated on their preparations for the event as footballers.
According to him, the camp has also helped to insulate the World Cup-bound team from issues of fund raising and sourcing for financial support for the Mundial.
He said: “They need to focus on preparation and get themselves ready for their matches, rather than being subjected to marketers or fund raisers for the event.’’
Edoreh, who was the immediate past Chairman of the Lagos Chapter of the Sports Writers Association of Nigeria, said the footballers had sacrificed enough with the determination of featuring in the tournament.
He urged the public to extend financial support to the Special Eagles to enable them to achieve their dream, adding that “they are seriously looking at the likelihood of making the trip.”