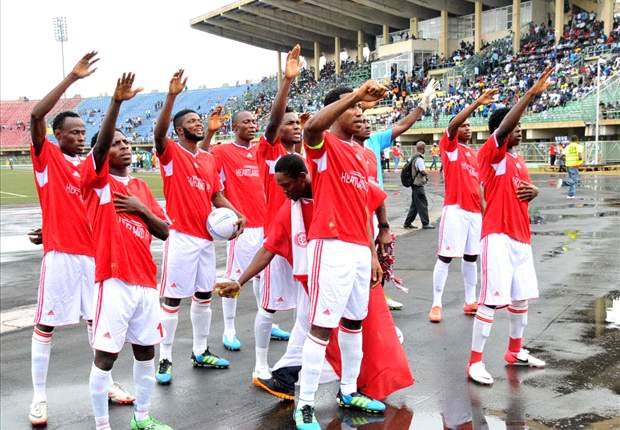 Abia Warriors Football Club defeated visiting Gombe United FC 1-0 on Sunday at the Umuahia Township Stadium, after wasting many goal scoring chances.
The News Agency of Nigeria reports that the hosts came into the game showing a lot of determination to roast their opponents.
But they later turned out to be wasteful with clear chances, with the strikers taking turns to shoot wildly in front of empty net, after displacing the goalkeeper on several occasions.
NAN reports that the 83rd minute goal by Sunday Adetunji sent the spectators, who were already fuming with anger over the wasted chances, into a wild jubilation.
Speaking in a post-match interview, the club’s Technical Adviser, Okey Emordi, said he was not happy with his players’ performance.
Emordi said the team would go back to the drawing board to review the game, identify their mistakes and find a way to correct them before encounters.
“Nobody will be happy that we wasted a lot of our chances,” he said, adding that he had to change his plan in the second half “because the game was not what I expected”.
The coach however expressed joy that they eventually clinched the all-important three points at stake, noting that the game would have ended in a draw.
Coach Hassan Wokar of Gombe United, who lauded the performance of his team, blamed the lone goal on “a minor mistake” by one of his defenders “who did not clear the ball well”, adding: “But it’s part of the game, winning, losing or drawing.”
NAN.