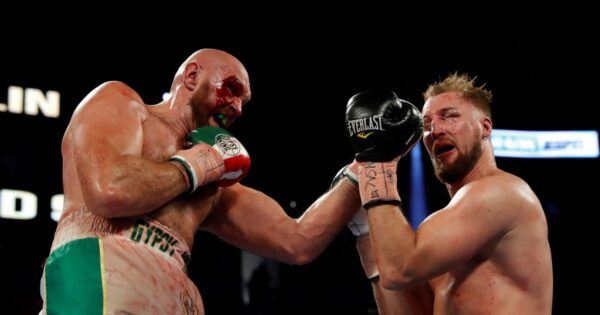 Tyson Fury has revealed he could retire from boxing by the end of the year.
The former heavyweight world champion has said he will fight three more times – including against Deontay Wilder next month – before hanging up his gloves.
Fury will bid to become a two-weight ruler on February 22 when he challenges Wilder for a second time following their controversial draw in 2018.
He could then face Wilder for a third time this summer – leaving just one more fight before he retires.
Responding to promoter Lou Di Bella and WBO president Paco Valcarcel’s suggestion he fights Bakhodir Djalolov, the Briton said: “You think I’m going to wait around for a six-fight novice to build up, haha; I got three fights left I’m out.”
Fury was dropped twice by Wilder in their first fight but had still done enough to win before the ringside judges scored the bout a draw.
The giant Traveller has fought twice since, beating Tom Schwarz and Otto Wallin, while Wilder has knocked out Dominic Breazeale and Luis Ortiz.
The loser of the rematch will have the right to call for a third fight – and earn 40 per cent of the purse.
Should Fury win both fights, he could sign off his career with a clash with Anthony Joshua who regained his three heavyweight titles by outpointing Andy Ruiz Jr in their rematch last month.
Joshua may first have to face mandatory challengers Kubrat Pulev and Oleksandr Usyk before any unification clash with either Fury or Wilder.
Fury and Wilder will not face the press before fight week in Las Vegas with the former claiming his rival is running scared.
He said: “This is Tyson Fury AKA the Gypsy King this is a message to Deontay the Bronze Bomber the big p***y Wilder.
“He’s not turned up to any of the media events today, blagging he’s got the flu because he doesn’t want to be in the same room as me because I’ll take him to school.
“His management team and his full team are afraid to put Deontay Wilder in the same room as Tyson Fury, facts.
“Keep him away Al, keep him away Shelly, keep him away his wife.
“Deontay, what a little bitch you’ve become. You can’t even come and see me and be face-to-face with me as you know you’ll be taken to school… p***y.”