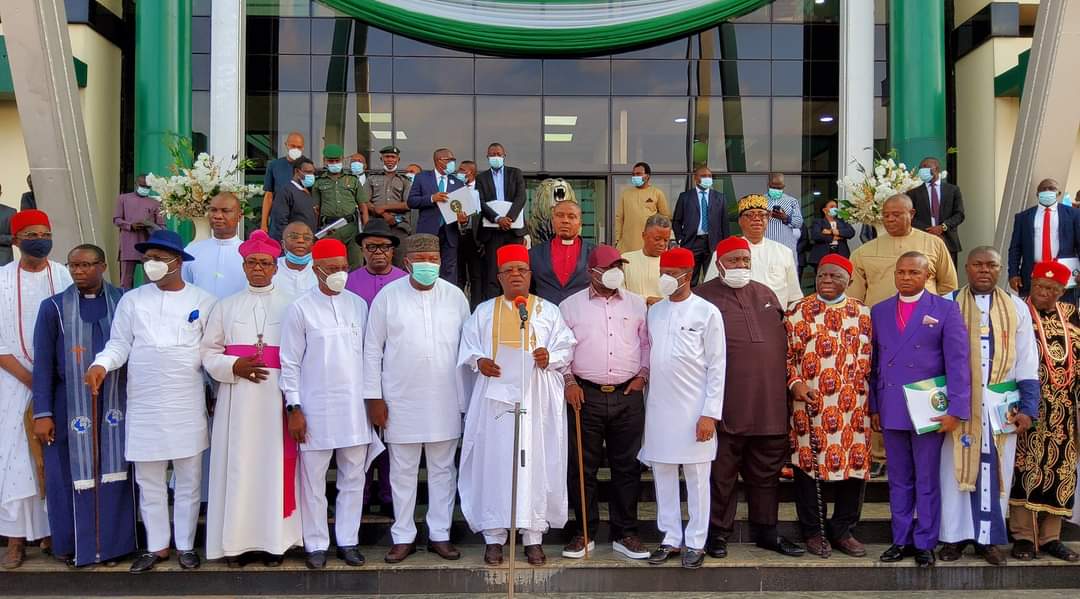 Governors of the South East geo-political zone, on Sunday, rose from a closed-door meeting with the leadership of religious, political and traditional institutions in the zone, Ohaneze Ndigbo and Joint Security Committee, at the Government House, Enugu, reiterating the adoption of EBUBEAGU as the common Joint Security outfit with its Regional Headquarters in Enugu.

In a Communiqué read by Chairman of the South East Governors’ Forum and Governor of Ebonyi State, Engr. David Umahi, the leaders stated that “EBUBEAGU will work with the Police and other security agencies in her operations to protect lives and property in South East”.

The meeting agreed on the structure and operational modalities of EBUBEAGU and to set up an Advisory Board for the security outfit.

It directed the Attorney Generals and Commissioners for Justice of the South East States to work with the Joint Security Committee to come up with the amendment of the existing State Laws to reflect the new EBUBEAGU outfit.

On the issues of restructuring, State Police and #EndSARS, the SEGF Chairman disclosed that “the meeting is in support of restructuring, the setting up of State Police and other national issues as discussed in the last NEC meeting”, adding that the “South East Governors agreed on the implementation of various ENDSARS Youth Empowerment Programmes in the South East states as soon as possible”.

The South East leaders also reiterated their commitment to state laws banning open grazing in the zone, and urged the security agencies and the local vigilantes to enforce the ban in all the states of the region.

The meeting also directed Ohaneze Ndigbo President to immediately form a South East Peace and Reconciliation Committee to engage the people of the zone “for the peace and security of our people and her visitors”, as well as a Strategy and Welfare Committee “to engage and protect our people, especially those who are being unfairly treated”.

“These committees must become functional within the next 10 (ten) days from date”, the Communiqué stressed.

Throwing their weight behind the communiqué, leaders of the religious institution in the South East, said that they stand in solidarity with the governors and support EBUBEAGU Security outfit.

Speaking, the Chairman of CAN in the South East, Bishop Godwin Okafor, pointed out that they will partner Ohaneze Ndigbo to ensure that there is peace in the zone, stressing: “We believe in peace; we preach peace and reconciliation and we will do our best to reconcile our people who have been offended to move Alaigbo forward”.